Nov 1, 2007
Joseph P. Farrell, born and raised in South Dakota, is a theologian, scholar on the East–West Schism and the author of a number of books on alternative history, Pseudohistory, historical revisionism, Pseudoarchaeology, physics, and science. He joins us for a terrific program about his book, "The Cosmic War: Interplanetary Warfare, Modern Physics, and Ancient Texts". This work presents the full history of the Exploded Planet hypothesis. There is ample evidence across our solar system of cataclysmic and catastrophic destruction events, and many planets are scarred from incredible impacts, and teeter in their orbits from unexplained causes. Rejecting naturalist and materialist assumptions of catastrophism forwarded by other researchers, Farrell seriously asserts that the causes are based in ancient myths of a Cosmic War in the heavens. Incorporating extraterrestrial artifacts, cutting-edge ideas in contemporary physics, and the texts of ancient myths into his argument, Farrell maintains that an ancient interplanetary war was fought in our own solar system with weapons of extraordinary power and sophistication. During hour two for our members, Joseph discusses the Enûma Eliš, ancient & modern technology & warfare, NASA & the "other" space program, the moon, scalar weapons, Nazi occultism, abduction reports of Nazis and greys seen together, the Iraq War, the Mesopotamian creation epic and more!

The Giza Death Star Deployed: The Physics and Engineering of the Great Pyramid

Earth Under Fire: Humanity's Survival of the Apocalypse (Hardcover) by Paul A. LaViolette

Worlds in Collision by Immanuel Velikovsky 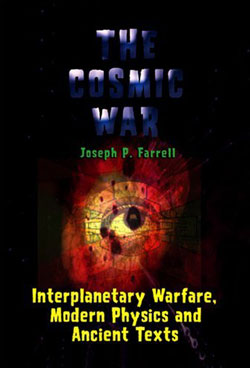