Jay Dyer is a writer and researcher from the Southern US who obtained his BA in philosophy, while his graduate work focused on the interplay of literary theory, espionage and philosophy. His website, Jay’s Analysis, is dedicated to investigating the deeper themes and messages found in our globalist pseudo culture, illustrating the connections between philosophy, metaphysics, secret societies, Hollywood, psychological warfare and comparative religion. Jay returns to RIR for a special extended segment in which we discuss the June 17, 2015 shooting at Charleston’s Emanuel African Methodist Episcopal (AME) Church, allegedly carried out by the now infamous Dylann “Storm” Roof. Jay provides his analysis of the patterns surrounding this event, which have curious similarities to those of other mass shooting sprees and false flags that have been highlighted in the mainstream media. We discuss many elements that point to stage craft, including the ready-made narrative for a “White Terrorist” rolled out into news coverage, a cartoonish manifesto appearing on cue, and gun control legislation waiting in the wings for approval. We also consider the phenomena of active shooter drill running concurrent with the shooting and telltale signs of crisis actors being used for on-camera interviews. Then, we take a look at the larger context of the “Summer of Rage” being touted by the leftist media and pushed internally by the Obama administration in an effort to ramp up the threat of racial war, switching from that of Islamic terrorism. Jay lays out some of the true history of the Confederacy and the Civil War and we talk about the attack on southern symbolism that is promoting the psychological warfare strategy of mindless collective guilt. Further, we get into the monopoly of victimhood, the dangers of mob mentality, and the eradication of anything holding a meaning that could be deemed offensive. Jay also points to liberal indictments that are targeting the millennials to rapidly transform traditional values and wholesome living and destroy reason and logic. Later, we discuss the implications of the controversial Trans-Pacific Partnership (TPP) simmering in the background while racially motivated groups profit off of the government’s strategy of tension. At the end, we examine why only certain criminals are lifted up in the media and how the centralized power structure uses dupes and entrapment to carry out a degenerate agenda. 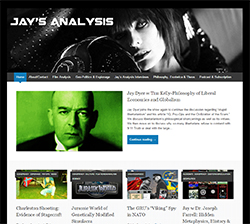