Feb 3, 2016
Jordan Maxwell continues as a researcher and an independent scholar in the field of occult / religious philosophy. His interest in these subjects began as far back as 1959. He has conducted dozens of intensive seminars, hosted his own radio talk shows, guested on more than 600 radio shows, and has written, produced and appeared in numerous television shows and documentaries, including the five-part Ancient Mystery Series.

Jordan returns to Red Ice for another look into what has created the catastrophic times we’re living in and where we are headed. He points to an old operation known as the World Revolution Movement that began in the early 1700s with secret fraternal orders in Europe as the leading edge behind our world class scene of chaos. We look at the corrupt institutions guiding this crusade – from the government to the banking industry, the military industrial complex and the education system – all of which Jordan says are being controlled by evil forces. Jordan talks about how human progress is being destroyed through a highly orchestrated and heavily financed Marxist experiment in cultural subversion, with America “liberation” and Hollywood at the forefront of the overall transvaluation of societal values. We discuss the liberal progressive agenda that came out of the opposition to fascism and National Socialism, which, with the aid of marketing, social engineering and manipulation, has now shifted mankind towards a profound state of ignorance and degeneracy. Further, we get into who produced the “American Dream” ideal and all its materialistic promises of liberty, justice and freedom.

In the members’ segment, we look at recent developments in the US political system, with the openly socialist Hillary Clinton and Bernie Sanders running as democrats. Jordan expands upon the fact that all communist governments are referred to politically as the “people’s democratic republics,” and that the American system has been infiltrated with communist ideology since the days of Marx and Lenin. We also discuss how the banking families of America and England financed the Bolshevik communist party. Then, we consider how thousands of years of rule by tyrants and war lords vying for worldwide control has been made possible through the promotion of terrorism, violence, drugs, alcoholism, brainlessness, and all things corrupt. Jordan illustrates why he believes there is a wicked hand, not from this world guiding humanity into the abyss. Later, we analyze the attack on the European nations, surging tide of social unrest and violence that has been brought on by the foreign Islamic invasion and what looks to be a coordinated effort by EU leaders to push a major clash of civilizations.

The Godfather Part II - The Immigrant 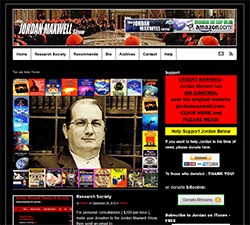