On the Edge of the Precipice of Civilization

Jul 18, 2014
Jay Weidner is a renowned author, filmmaker and hermetic scholar, considered to be a ‘modern-day Indiana Jones’ for his ongoing worldwide quests to find clues to mankind’s spiritual destiny. He is the director of the popular documentary, Kubrick's Odyssey among several others. Jay was featured in the History Channel’s documentary, The Lost Book of Nostradamus and in the History Channel’s special, Nostradamus 2012 and also in Brad Meltzer’s, Decoded. Jay is the co-author of The Mysteries of the Great Cross of Hendaye; Alchemy and the End of Time and A Monument to the End of Time. We’ll discuss current politics in America ranging from insane leftists such as Bill Ayers, to communism and neo-cons who push for war. Jay speaks about how we’re on the precipice of either a successful revolution or the final throes of the ending of our civilization. Later, Jay talks about how liberals do not see the bigger picture, only what makes them feel good in the moment. In the member’s hour, we’ll discuss the Hollywood propaganda machine and getting the alternative going. Jay ties in the Brotherhood of Saturn, which includes cultural Marxists who seek to “transform humanity into slaves for the gods.” Also, Jay gives his analysis of Leonard Cohen’s album The Future. Later, he discusses the wisdomification of the planet.

Kubrick's Odyssey Secrets Hidden in the films of Stanley Kubrick
The Clash of Civilizations and the Remaking of World Order
The Saturn Myth: A Reinterpretation of Rites and Symbols Illuminating Some of the Dark Corners of Primordial Society
Fire & Ice: Magical Teachings of Germany's Greatest Secret Occult Order (Llewellyn's Teutonic Magick Series)
The Mysteries of the Great Cross of Hendaye: Alchemy and the End of Time
Secrets of Alchemy - The Great Cross and the End of Time by Jay Weidner

The Imminent Fall of the West2012 Roundtable SpecialKubrick's Odyssey: How Stanley Faked the Moon Landings & Alchemical Kubrick: The Great Work On FilmKubrick's Odyssey, The Brotherhood of Saturn & The Clash of CivilizationsFuture, Freemasonry, Numerology & GeometryAlchemical Cinema, 2012 the Odyssey, and Cuzco Revelation 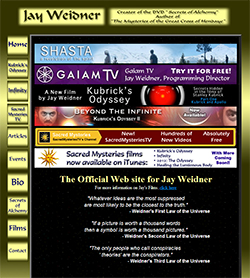