Gilad Atzmon is an Israeli born jazz musician and author that lives and works in England. He is trained in composition and jazz at the Rubin Academy of Music, Jerusalem. He is a member of the Blockheads, founded the Orient House Ensemble in London, and has recorded and performed with many rock music legends. Gilad also writes on political matters, social issues, Jewish identity and culture. Atzmon is the author of The Wandering Who, and A to Zion – The Definitive Israeli Lexicon.

In this episode, Gilad speaks about his understanding of the failed Turkish Coup that followed attempts by Erdogan to reinstate Turkey’s amicable relationship with Russia. Gilad speculates that Turkey is on its way to becoming the new Syria, as it’s on one hand an extremely Nationalist country and on the other at the forefront of the NATO/neocon intervention project. We learn about the uprising and taking to the streets by the Turkish people that stopped the military takeover, which Gilad says has been likened by some to an Islamofascist revolt. Then, we discuss how the Brexit decision relates to a bone of contention for Turkey’s role in the dirty NATO wars and the refugee invasion sprouting out of Eastern Europe. Gilad points out some factors related to the Jewish Bolshevist movement in Russia and the Zionist occupation of Palestine that echo in present patterns being seen in Turkey, and he emphasizes how Erdogan’s popularity is another clear signal of the nationalist uprising and growing awareness of ethnic belonging. We also look at the perils of today’s trade-driven capitalist Britain, which Gilad calls Mammonism, and was predicted nearly 100 years ago by the genius manufacturer and business tycoon Henry Ford.

In the member half, we hone in on the Brexit decision and newly appointed PM Theresa May’s clampdown on free speech. Gilad speaks more to the Mammonite funded power structure that is still at the helm of Britain’s capitalist system, and we draw some comparisons to the Mammonist monster manifesting itself in American politics. We look at parallels between Hitler’s Mein Kampf and Trump’s plea to a more fascist way of thinking, which can be understood by looking at fascism as an economic system that appeals more to the will of the people. Further, Gilad gives his take on the rise of Nationalism in Europe and indications that we’re living in a post-political era as reflected in the miserable failure of NATO and the disastrous multicultural experiment. We consider what is causing the current trend of immigrant non-assimilation in Europe, and why the false narrative of needing more working people as a means to subsidize society cannot be superimposed on the people now that so many citizens have awoken to the globalist scam. We round off the conversation with thoughts on the appeal of civic nationalism in the demographically divided and increasingly un-PC West.

A to Zion: The Definitive Israeli Lexicon
A to Zion: The Definitive Israeli Lexicon (Buy from Gilad.co.uk)
The Wandering Who?
Guide to the Perplexed
My One & Only Love
The Invention of the Jewish People
Thirteenth Tribe
(((Our Greatest Ally))) and the Clash of Civilisations: Iraq, Iran and the Plan to Remake the Middle East
The Holocaust Industry: Reflections on the Exploitation of Jewish Suffering, New Edition 2nd Edition 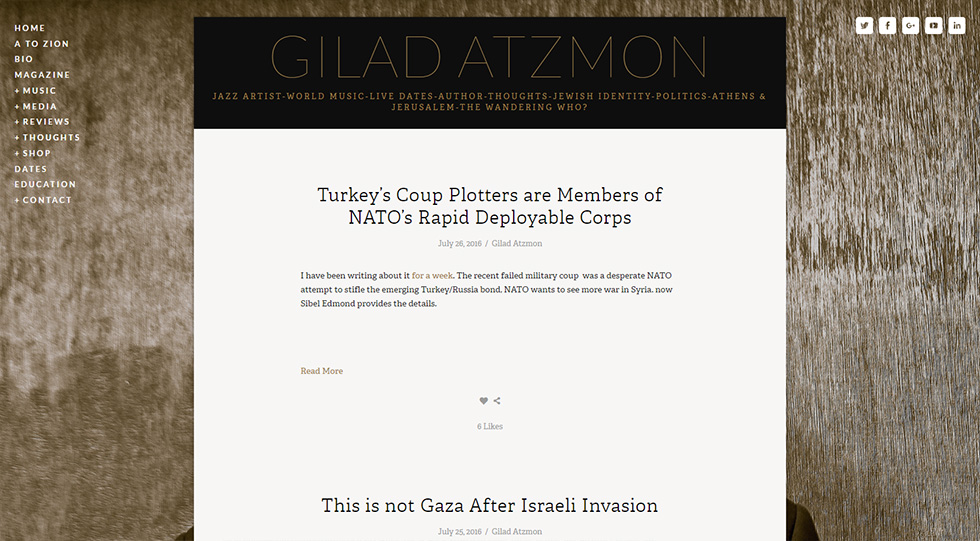