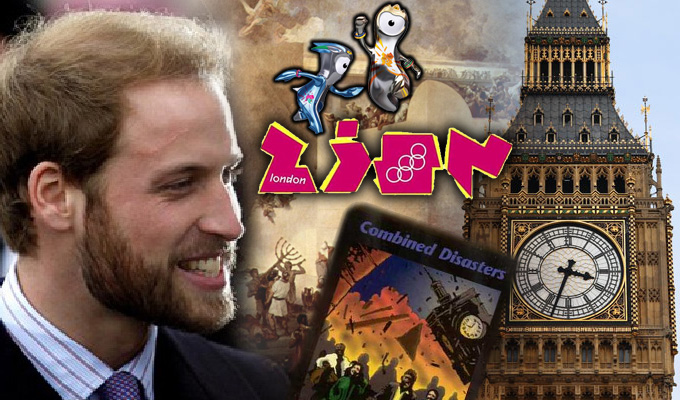 Even Iran is boycotting the 2012 Olympics because of the blatant Zion symbolism.

So adding to the pile of connections between the 2012 Olympics in London and the "aspirations" of Zion and the symbolic rebuilding/destruction of the temple, another tidbit has now come to light thanks to an email from a listener.

It turns out that "Tisha B’Av" falls on the 27th of July this year (2012) and this is the SAME DAY that the London Olympics opening ritual/ceremony takes place.

Tisha B’Av (the Ninth of Av) is an annual fast day in Judaism, named for the ninth day (Tisha) of the month of Av in the Hebrew calendar. The fast commemorates the destruction of both the First Temple and Second Temple in Jerusalem, which occurred about 655 years apart, but on the same Hebrew calendar date.

London is the "New Jerusalem" (Zion) - The Street Plan

Stratford in London, is to become host to the Olympic village, which is undergoing massive regeneration due to the project. The site was claimed to be the last area of suitable waste land in London. Pretty lucky eh? Or maybe it was left alone for years for this very reason! I choose the latter.

And so... to the point. Take a look at the Olympic site with the Google Maps road view. On a first glance it looks like any other map view, but persevere... take a closer look at the road names: 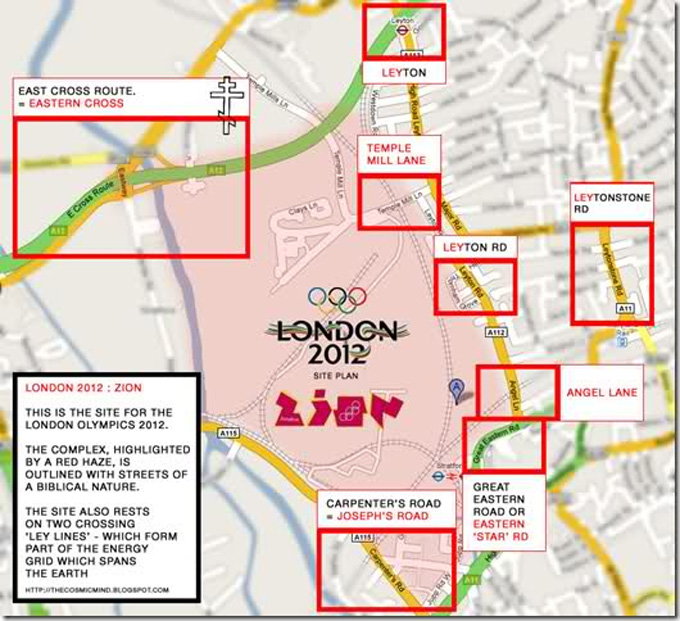 For a detailed interpretation of the Masonic/Christian/Judaic names of these streets see Rik Clay’s blog posting from July 2008 (re-posted on Justin Stephens blog) or alternatively, listen to the programs with Rik linked up above for the full picture.

Tom Horn, during a recent Red Ice Radio program, highlighted the very interesting detail that the Zohar talks about how a Moshiach (Messiah) will Declare himself in 2012. The year is 5773 in the Hebrew Calendar.

Also, the "Sun God Child" Tammuz is the month of July in Arabic.

Who is this "Sun King", messiah or anti-Christ (as some have argued)?

Read up on British Israelism if you want to understand more about the belief that the British Royal Family is directly descended from the line of King David.

The short poem "And did those feet in ancient time" by William Blake has echoes of this legend that connects Israel and England.

The poem was inspired by the apocryphal story that a young Jesus, accompanied by his uncle Joseph of Arimathea, travelled to the area that is now England and visited Glastonbury during Jesus’ lost years. The legend is linked to an idea in the Book of Revelation (3:12 and 21:2) describing a Second Coming, wherein Jesus establishes a new Jerusalem.

Destruction of the temple 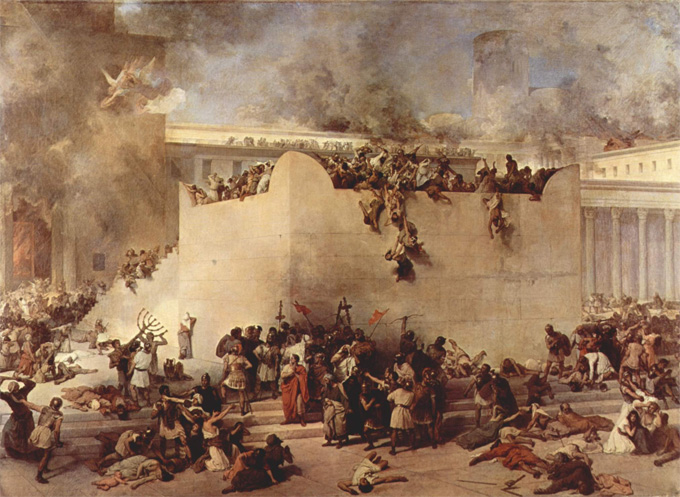 The Siege of Jerusalem in the year 70 AD was the decisive event of the First Jewish-Roman War. The Roman army, led by the future Emperor Titus, with Tiberius Julius Alexander as his second-in-command, besieged and conquered the city of Jerusalem, which had been occupied by its Jewish defenders in 66.

The siege ended with the sacking of the city and the destruction of its famous Second Temple. The destruction of both the first and second temples is still mourned annually as the Jewish fast Tisha B’Av. The Arch of Titus, celebrating the Roman sack of Jerusalem and the Temple, still stands in Rome.

Destruction of the "tower"

In the Illuminati card game made by Steve Jackson Games (SJG) in 1995 there is a card that looks very much like the destruction of Big Ben. 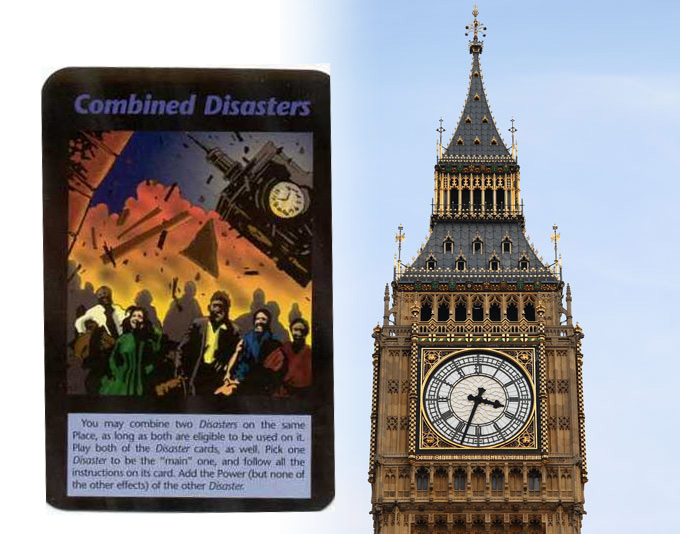 The Illuminati card game has been eerily correct in "predicting" major world events so far.

Others have said that it actually resembles the clock tower of Wako store in Ginza, Tokyo and not the Big Ben in London. Does this indicate that it’s still something to come? 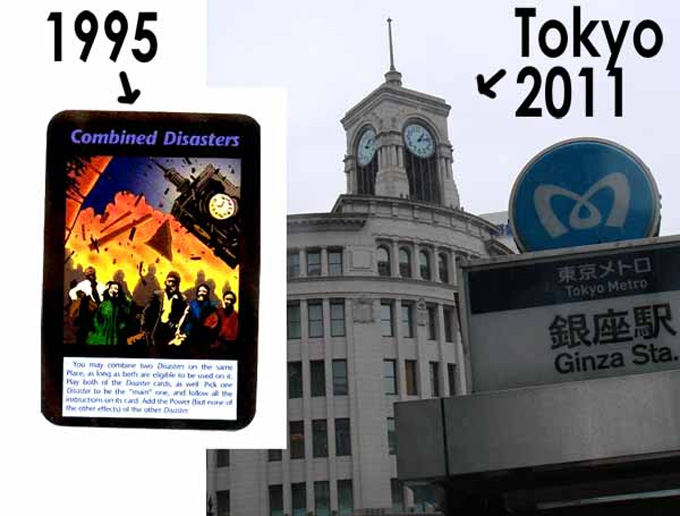 We also have the creepy-looking mascots for 2012 Olympics - Wenlock & Mandeville - it’s all rife with symbolism.

Richy at lawfulrebellion.org has also done a great job condensing some of material concerning the strange mascots, another odd factor in this whole saga.

judaism.about.com - What Is Tisha B’Av?

Poem by William Blake - And did those feet in ancient time 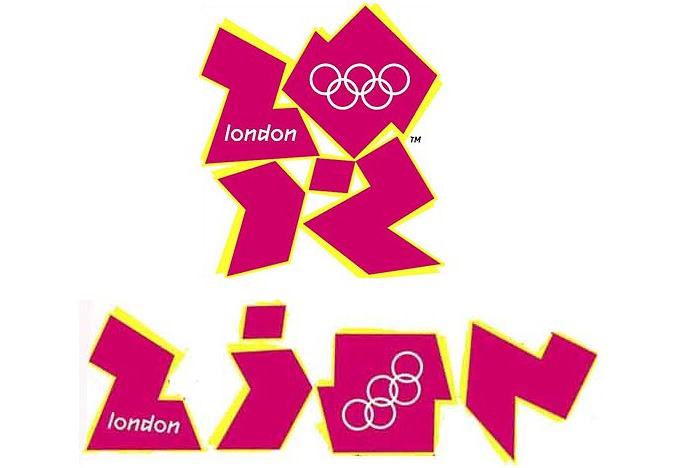