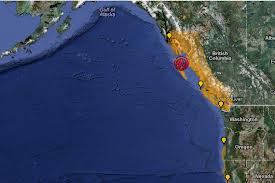 A 7.7 Earthquake hit the coast of British Columbia on Saturday night, and there has since been as many as 40 aftershocks today. Including one that measured 6.4 in magnitude. The quake sent many residents on the coast, fleeing for higher ground due to tsunami warnings. That where issued as far away as Hawaii.

The Earthquake originated on the island of Haida Gwaii, other wise know as the Queen Charlotte Islands region. The islands are located along the Queen Charlotte Fault, which is an active transform fault that produces significant earthquakes every 3–30 years. (the last major one happening in 1949, that measure 8.1 in magnitude)

As soon as I caught the news of this quake today, the first thing that came to mind was. Wasn’t Haida Gwaii recently in the news?

“In July 2012 a private businessman named Russ George, or as the Vancouver Sun has dubbed him the “rogue climate hacker”. Dumped over 100 tonnes of iron into the pacific ocean, just off the coast of British Columbia (Haida Gwaii) in the largest ever geoengineering experiment.

The iron is meant to help spawn plankton (main stream press have dubbed these creatures “artificial plankton”) that will absorb carbon dioxide and then sink to the ocean bed. A geoengineering technique known as ocean fertilization. George hopes that this will be lucrative in carbon credits. But even the strongest of man made climate change proponents agree that he has gone too far, and some are outraged. According to the main stream news outlets.”
Continue Reading

Could this be simply be a coincidence? Well as many in the alternative media have realized. Coincidences in situations like this are very, very rare.

This type of situation would also be ideal for any private corporation of government in the chance of a disaster in result of a geoengineering experiment of that scale. It gives plausible deniability. Since this is in the area of an active fault line, there is no chance of proving that the experiment caused the earthquake.