A sign from above? Lightning strikes Vatican after Pope Benedict resigns 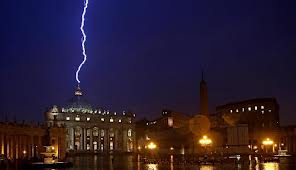 Pope Benedict XVI’s resignation came like a bolt from the blue overnight.

And the weather around the Vatican was eerily appropriate, with lightning striking St Peter’s Basilica, one of the holiest Catholic sites, on the same day that Pope Benedict announced he would be stepping down.

Global news agency Agence France-Presse published an image of lightning striking the basilica’s dome, which it said was taken "on the day the Pope" announced his resignation.