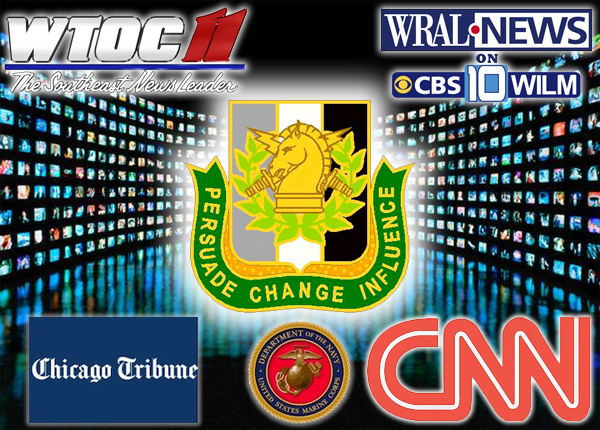 The U.S. Army has used local television stations in the U.S. as training posts for some of its psychological-operations personnel, The Upshot has learned. Since at least 2001, both WRAL, a CBS affiliate in Raleigh, N.C., and WTOC, a CBS affiliate in Savannah, Ga., have regularly hosted active-duty soldiers from the Army's 4th Psychological Operations group as part of the Army's Training With Industry program. Training With Industry is designed to offer career soldiers a chance to pick up skills through internships and fellowships with private businesses. The PSYOPS soldiers used WRAL and WTOC to learn broadcasting and communications expertise that they could apply in their mission, as the Army describes it, of "influenc[ing] the emotions, motives, objective reasoning, and ultimately the behavior of foreign audiences."

WRAL and WTOC were on a list of participants in the Army's Training With Industry program provided to The Upshot in response to a Freedom of Information Act request, and a spokeswoman with the Army's Human Resources Command confirmed that PSYOPS soldiers worked at the stations.

"Both of those stations are very supportive of the military, and think very highly of the program," said Lt. Col. Stacy Bathrick. "Our officers are there to learn best practices in terms of programming and production side that they can use when they deploy. To be able to get hands-on interaction with a news station — there's nothing like that." Bathrick said the soldiers were never involved in newsgathering.

The relationship between PSYOPS, Training With Industry, and television news operations has stirred controversy in the past. In 2000, after a Dutch newspaper reported that PSYOPS troops had been placed in CNN's newsroom under the program, CNN discontinued the internships and admitted that they had been a mistake. "It was inappropriate for PSYOPS personnel to be at CNN, they are not here now, and they never again will be at CNN," a spokesperson said at the time.

WRAL's news director, Rick Gall, feels differently. "My sense was, this was an educational opportunity to see how the broadcasting industry operates," said Gall. "They'd spend time in the various departments of the station, including the newsroom. I wasn't concerned about having someone learn what we do, and there was no influence on newsgathering. It was like shadowing." WRAL is owned by Capitol Broadcasting Company, which owns a variety of media outlets in North Carolina. Gall said WRAL hasn't hosted a soldier — which he described as an "embed" — since 2007. According to Bathrick, the Army's relationship with WTOC in Savannah is ongoing — a PSYOPS officer is currently embedded there. Bill Cathcart, WTOC's vice president and general manager, did not return phone calls or an e-mail seeking comment. WTOC is owned by Raycom Media, a television chain based in Alabama.

WRAL and WTOC are not alone among media outlets that the U.S. military has sought to learn from through Training With Industry. The Upshot has previously reported that the Marine Corps placed public affairs officers with the Chicago Tribune for several years in order to better understand how to influence and work with the news media, and CNNMoney.com hosted an officer in 2007 and 2008, despite the network's embarrassment over the program in 2000.

Eldon Taylor - Whose Thoughts Are You Thinking?

Michael Tsarion - The Marketing Industry, Teenagers & The Subversive Use of Sacred Symbolism in the Media