Bubbles of Energy Are Found in Galaxy 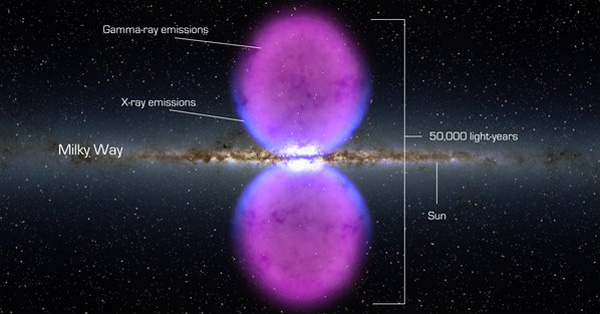 From end to end, the newly discovered gamma-ray bubbles extend 50,000 light-years, or about half of the Milky Way’s diameter, as shown in this illustration.

Something big is going on at the center of the galaxy, and astronomers are happy to say they don’t know what it is.

A group of scientists working with data from NASA’s Fermi Gamma-Ray Space Telescope said Tuesday that they had discovered two bubbles of energy erupting from the center of the Milky Way galaxy. The bubbles, they said at a news conference and in a paper to be published Wednesday in The Astrophysical Journal, extend 25,000 light years up and down from each side of the galaxy and contain the energy equivalent to 100,000 supernova explosions.

“They’re big,” said Doug Finkbeiner of the Harvard-Smithsonian Center for Astrophysics, leader of the team that discovered them.

The source of the bubbles is a mystery. One possibility is that they are fueled by a wave of star births and deaths at the center of the galaxy. Another option is a gigantic belch from the black hole known to reside, like Jabba the Hutt, at the center of the Milky Way. What it is apparently not is dark matter, the mysterious something that astronomers say makes up a quarter of the universe and holds galaxies together.

“Wow,” said David Spergel, an astrophysicist at Princeton who was not involved in the work.

“And we think we know a lot about our own galaxy,” Dr. Spergel added, noting that the bubbles were almost as big as the galaxy and yet unsuspected until now.

Jon Morse, head of astrophysics at NASA headquarters, said, “This shows again that the universe is full of surprises.”

One of the most surprised was Dr. Finkbeiner. A year ago he was part of a group led by Gregory Dobler of the Kavli Institute for Theoretical Physics in Santa Barbara, Calif., that said it had discerned the existence of a mysterious fog of high-energy particles buzzing around the center of the Milky Way. The particles manifested themselves as a haze of extra energy after all the known sources of gamma rays — the most energetic form of electromagnetic radiation — had been subtracted from Fermi data that had recently been made public.

At the time, Dr. Finkbeiner and his colleagues speculated that the haze was produced by dark matter. The center of the galaxy is home to all manner of wild and woolly high-energy phenomena, including a gigantic black hole and violently spinning pulsars, but cosmological theories also suggest that dark matter would be concentrated there. Collisions of dark matter particles, the theory goes, could produce showers of gamma rays.

But in the follow-up analysis, the haze — besides being bigger than Dr. Finkbeiner and his colleagues had thought — turned out to have sharp boundaries, like, well, a bubble. Dark matter, according to the prevailing theory, should be more diffuse.

He and the other scientists said this did not mean that dark matter was not there clogging the center of the galaxy, but that it would be harder to see.