Cameron’s Inquisition Against Esoterica Marks the Beginning of Fascist Tyranny 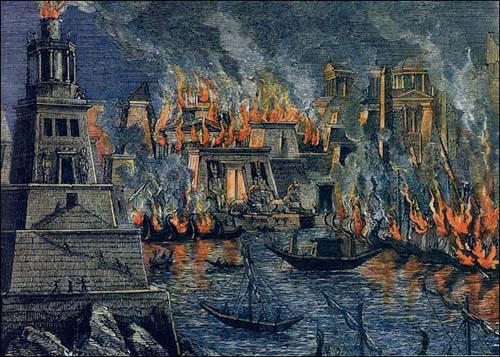 This is not censorship by the back door. They’re doing it right in front of noses and hiding it in plain sight.

” Based on conversations with several ISPs, the new “parental controls” will reach far beyond pornography. By default, the controls will block access to “violent material,” “extremist and terrorist related content,” “anorexia and eating disorder websites,” and “suicide related websites.”

“In addition, the new settings will censor websites that mention alcohol or smoking. The filter will even block “web forums” and “esoteric material”…

I can’t help wondering how far this censorship of esoteric material will spread. Because to be consistent, surely this ‘filter’ should extend to books shops too? Are there to be special dark rooms in Waterstones and Foyles for the purchasing of esoteric literature, like, for instance, the works of William Shakespeare which are packed full of esoteric and mystical allegories? Even the stories about Merlin and Arthur found in Geoffrey of Monmouth’s History of the Kings of Britain are derived from ancient esoteric Welsh texts known collectively as the Mabinogian.

Or will there be Nazi-style book burnings in the streets of the Bible, Plato’s Critias or The Republic, the Vedas, Buddhist, Taoist and Tibetan ancient texts, the i-Ching, the Tarot, the Gnostic Nag Hammadi gospels, the Black Book of Carmarthen … the list is endless… because all of these contain myths which are in effect esoteric teachings. 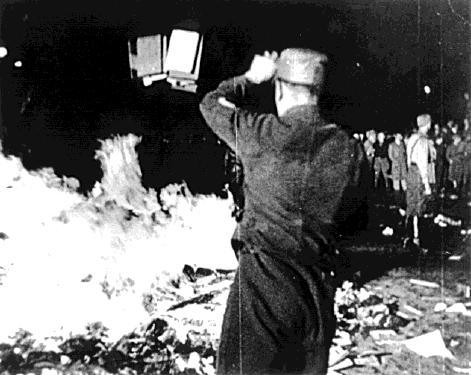 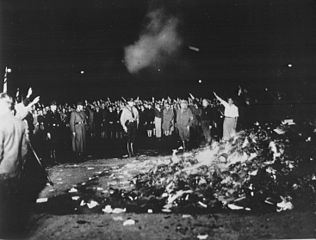 Opernplatz, Berlin book burnings
And what about those that practice the Kabbalah, one of the oldest Western esoteric teachings in existence? What will happen to the Jews that follow the Torah? What about the Masons, because surely their practises are based on ancient Egyptian Mystery teachings? Are horoscopes to be banned from newspapers? And how does the burning of esoteric literature differ from the destruction of that huge Buddha in Afghanistan by the Taliban?

Will ducking stools now be put up on village greens, up and down for the land, for those that won’t comply with this kind of Inquisition? Will it be like when the Pope Theophilus ordered the burning down of the Library of Alexandria and the trashing of all the Mystery Groves? 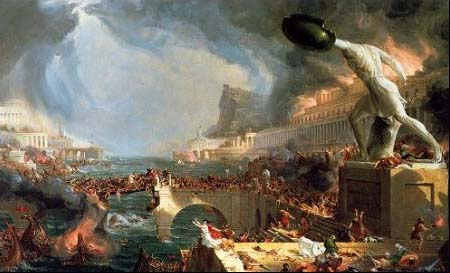 And this is before we even get to discussing which movies would have to be banned.

Just what does David Cameron have against esoterica anyway … because it’s certainly not against the law? But I guess this is what we’re going to be seeing more and more of, as we come under the tyranny of an increasingly Stasi State which is the shame of the world over for its record on child snatching and arms dealing, and a corporate State run media machine which is too frightened to say boo to a goose.

Esotericism or Esoterism signifies the holding of esoteric opinions or beliefs,[1] that is, ideas preserved or understood by a small group of those specially initiated, or of rare or unusual interest.[2] The term derives from the Greek ἐσωτερικός (esôterikos), a compound of ἔσω (esô): “within”, thus pertaining to interiority or mysticism. Its antonym is “exoteric”.

Although Esotericism refers to the exploration of the inner meanings and symbolism of various philosophical, historical and religious texts, these texts themselves are often central to mainstream religions. For example the Bible and the Torah are examples of esoteric material[6].

All religions began as esoterica… the mythological stories were then literalised, such as in the case of Christianity, into a real, historic, living, dying and resurrecting godhead. However, there is no evidence for a real Jesus Christ living and being crucified in Jerusalem around 2,000 years ago. Added to which, those that understand how to read esoteric teachings can see, very clearly, the mystical bones of the understory poking through the stories in the Bible, and how the key events of Jesus’s ‘life’ match mystical and astrological allegories of other cultures that were around at the time, in the Middle East and Mesopotamia.

Maybe this is why David Cameron doesn’t like it… and he has a right not to like it. But he doesn’t have the right to stamp his personal likes and dislikes over our right to freedom of expression and free speech, and our ability to learn about what our ancestors’ believed in and practised.

Because please be in no doubt that this what is happening. This ‘filtering out’ of esoteric material and web forums on the internet are the first steps towards out-and-out censorship of anything that the corporate state, via its puppet David Cameron, doesn’t want you to read about or to learn about… which basically amounts to anything that will empower you as an individual. Unfortunately, the rest of our MPs are too busy going to sex parties and shoving coke up their noses to care.

It seems that our freedom of speech and freedom of expression, and our accessibility to the information that we choose to engage with, which our parents and grandparents fought so hard against Hitler for, will soon be gone …. unless we fight them for it. They have no respect for us or for our right to it… and so sadly, there is no other way.

This article is being discussed on Ishtar’s Gate esoteric forum here. You’re welcome to join in.... while you still can!