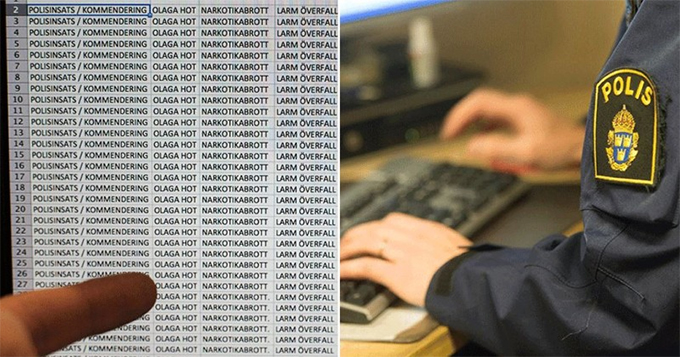 Swedish police have covered up thousands of crimes involving migrants over the past four months, all of which have been classified under a secret ‘291 refugee code’ designation, it has been revealed.

According to a report in Swedish newspaper Svenska Dagbladet, around 5,000 incidents have been kept secret, including 559 cases of violence, 194 assaults, two terror threats and four rapes.

The article explains that the incidents have been covered-up because of a directive from the National Operational Department that any information pertaining to the behavior of “refugees” be censored.

Official sources blamed the violence on “traumatized people” being kept in “overcrowded places,” with NOA commander Thomas Wallberg adding that it was “sad” the information wasn’t made available to the public.

Wallberg also “told the newspaper that there are even more incidents than the Swedish newspaper has (not) been given access to,” reports Speisa.

Police have also been ordered not to reveal how much resources they have used to deal with refugees entering Sweden, with one officer telling Dagens Nyheter that the secret code was “absolutely ridiculous”.

Last month, Svenska Dagbladet also reported on a directive that police were not to give descriptions of refugee criminals involved in “everything from minor traffic accidents to serious crimes like robbery, abuse and murder” so as not to appear “racist”.

However, accusations of Swedish police covering up crimes linked to migrants stretch back further, with details of the molestation of women by Muslim migrants at a music concert in Stockholm last summer being kept under wraps so as to “avoid an anti-immigrant backlash”.

Authorities have been caught hiding crimes committed by migrants from the public in several other European countries, including Germany, where details of the New Years Eve sex attacks on hundreds of women in Cologne were initially buried.

Police in Detmold also refused to divulge details about the rape of a 13-year-old girl at a migrant camp because they did not want to “give legitimacy to critics of mass migration”.

Germany’s top broadcaster ZDF is also refusing to run crime stories about Muslim rape suspects because, in the words of Editor in chief Ina-Maria Reize-Wildemann, “We don’t want to inflame the situation and spread the bad mood. [The migrants] don’t deserve it.”

Earlier this week, former head of ZDF Bonn Dr. Wolfgang Herles revealed that the station takes orders from the government on what to report and that journalists are, “not allowed to say anything negative about the refugees”.

As we highlighted back in October, police in Finland were also ordered by the country’s national police board not to publicly identify migrants as criminal suspects over concerns that doing so would encourage a ‘racist’ backlash against the wave of asylum seekers entering Scandinavia.