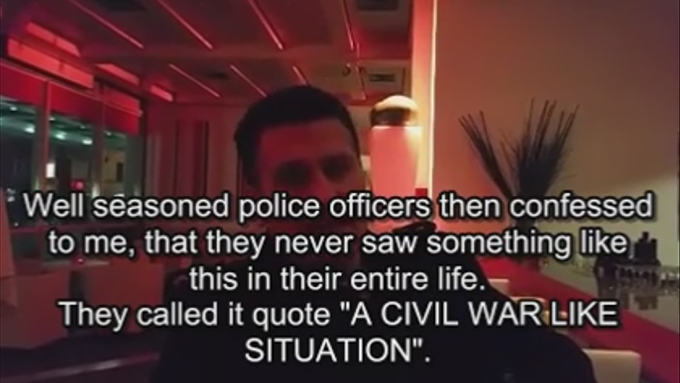 A bouncer who was working at a nearby hotel during the mass molestation of women in Cologne on New Years Eve by Arab and North African migrants has revealed how police told him they thought the situation resembled a “civil war”.

Ivan Jurcevic, who was working directly opposite Cologne Cathedral when the attacks began, helped protect some of the women who came running to him for help while police were completely absent.

Jurcevic explains how the situation quickly escalated as a result of a stabbing that occurred after 9pm.

“These people that we welcomed just 3 months ago, with teddy bears and water bottles on the Munich main railway station started shooting (fireworks) at the police,” said Jurcevic.

“Well seasoned police officers then confessed to me that they never saw something like this in their entire life. They called it a “civil war like situation,” he added, noting that there had been no press coverage of this angle.

Jurcevic went on to describe how women who were under assault by the migrants “came to me and just asked if they could stand next to me so I could look after them.”

The same men who had chased the women then started attacking Jurcevic as well as hotel guests.

“I beat them all up, I can tell you honestly,” he stated.

As the “rampage” continued, Jurcevic witnessed the migrants, “beat the shit out of the head from a guy that was lying on the ground, they then jumped on his head.”

After riot police arrived, the attackers were restrained for around an hour and a half, but because cells in the surrounding police stations were full, there was nowhere to take the culprits.

“So the police had to release the previously arrested and restrained offenders, which then in turn gathered in front of the police vehicles and yelled ‘fuck the police’ and spit on the windshields of the police cars,” said Jurcevic, adding that the police were powerless to do anything because they were torn between guarding the arrested culprits and responding to new attacks that were happening elsewhere.

Jurcevic explained how he previously thought opposition to the wave of migrants flooding into Germany was “right-wing propaganda,” but that the shocking events of that night had changed his mind.

“This was real!” he exclaimed.

With Cologne set to celebrate its annual festival next month, Jurcevic fears that the tension will only escalate further.

“In Cologne, it will really explode here!” he warned.