May 7, 2010 Source: news.discovery.com
The innovative program can not only predict a caller’s emotional state, but may also diagnose a range of medical conditions. 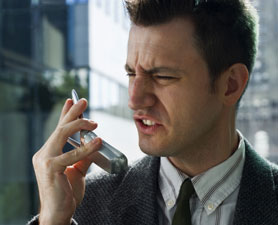 Less than two minutes into a cell phone conversation, a new computer program can predict a broken heart -- literally and figuratively.

An Israeli company called eXaudios has developed a computer program, known as Magnify, that decodes the human voice to identify a person’s emotional state.

Some companies in the United States already use the system in their call centers. eXaudios is even testing the software’s use in diagnosing medical conditions like autism, schizophrenia, heart disease and even prostate cancer.

"When agents talk with customers over the phone, they usually focus on content and not intonation, unless the customer is screaming," said Yoram Levanon, President and CEO of eXaudios, which recently won a $1 million prize at the Demo 2010 conference. "If a customer is screaming, you don’t need the software. But if we can identify the other emotions of a customer, we can save customers and companies money."

A number of companies sell software that analyzes conversations between a customer service agent and a customer after the conversation is over. Magnify monitors a phone call in real time. The program then lists the caller’s emotions on screen.

When Discovery News’ technology correspondent’s voice was decoded using the Magnify software, the output read like a psychologist’s notebook: "Struggling to contain an inner excitement. Keeping emotions and/or creativity in check. Warm and fuzzy."

In a call center, the Magnify system then suggests various tactics to a customer service representative, depending on the needs of the company.

If a person is interested in a company’s product or service, the software suggests various ways a customer service agent can pitch it. Magnify can also tell if a person is unlikely to buy and suggest the agent end the conversation before angering the client. The program can even predict when a customer will start yelling up to one minute before it happens, said Magnify’s SVP of Business Operations, Alon Klomek.

It’s taken eXaudios well over a decade to develop Magnify, said Levanon. Magnify works by teasing apart a person voice, separating the frequencies and measuring various qualities of those wavelengths, such as their intonation and intensity.

Magnify is not 100 percent accurate, however. Between 17 percent and 24 percent of the time Magnify fails to identify a caller’s correct emotions.

"We tried to find physical rules that explained why we were wrong," said Levanon. "What we found was that there was a medical reason we were wrong."

Yoram Bonneh, an autism researcher at the Weizman Institute of Science in Israel, used the Magnify software in his work with autistic five-year-old children. Out of 80 children -- 40 previously diagnosed with autism and 40 non-autistic children -- Magnify successfully identified 85 percent of the autistic kids.

These were children with very mild forms of autism, said Bonneh. "They can speak, and when you listen to them you cannot tell a difference (between the autistic and non-autistic children)," said Bonneh. "But when you analyze their voices, you find differences that are significant, which allows us to classify a child as autistic or not."

In addition to Bonneh’s autism study, eXaudios cites other research in Parkinson’s disease, schizophrenia, heart disease and dyslexia. The company even has anecdotal evidence that they can diagnose prostate cancer by analyzing a person’s voice. According to Levanon, a person with prostate cancer has a "Grand Canyon" of missing tones that is "catastrophic to the voice."

eXaudios is not the only group that has linked a person’s voice to a medical condition. Cogito Health, a Boston-based company, already uses software originally developed by Alex Pentland of the Massachusetts Institute of Technology to diagnose depression in patients, and more recently, for patient drug compliance and post traumatic stress syndrome.

Analyzing a person’s voice to gain clues about their health and emotional state is nothing new, said Pentland. Humans do it all the time. The computer is just doing a better job at voice analysis than most people because it largely ignores content and focuses on form.

Whether a computer or human is analyzing a conversation, however, "it’s not what you say," said Pentland. "It’s how you say it."