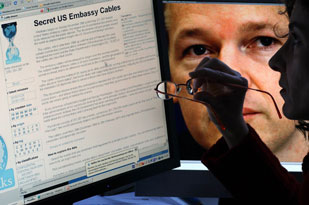 Much has been reported about the details of the cables that were sent from US embassies around the world to the state department in Washington - the content ranging from the highly informative to what some ex-diplomats describe as little more than political gossip.

But embarrassing as some of the revelations might be, the most politically damaging document did not come into state department - it was sent out.

Most of the traffic originating from the embassies consists largely of reported facts or offering personal opinion and interpretation, but what originate from state department are instructions, commands and policy.

The secretary of state herself has made this point inadvertently. In her first public response, Hillary Clinton argued strongly that no matter how sensitive the information from diplomats, it did not reflect the views of the US government. Policy, she said, is made in Washington, not by those reporting from the field.

This is why the cable headed "Reporting and Collection Needs: The United Nations: REF STATE 048489" is of critical importance. The document that requests in specific detail information about UN personnel and operations is issued in the name of the state department and of the secretary. It is dated 30th July 2009 - a few months after Clinton took over the state department.

Even the most cursory read makes clear diplomatic staff is being asked to conduct a massive intelligence gathering exercise - involving, to put it bluntly, the theft of personal data. This, on the face of it, is a document asking diplomats to carry out activities that are not only against all accepted protocols, but are illegal in terms of US or international law.

To repeat, it is couched as an order, an instruction, not a request.

The state department secretary and her spokesman have been adamant that they will not discuss any specific cables, and initially would not even acknowledge or comment on their authenticity.

But what has emerged over the past days is a pattern of statements that would appear an attempt to separate the secretary of state from the contents of this cable in particular.

In his first reaction, state department spokesman PJ Crowley stated that thousands of messages emanating from the department, go out under the secretary’s name - in terms of protocol - but this does not mean she wrote them. The implicit suggestion too that she might not even be aware of the contents.

Then, in a briefing on 30th November, the spokesman went even further: He inadvertently said the contents of the UN cable (the existence of which had not been formally acknowledged) did not originate in the state department itself. Here is a transcript of the interchange:

PJ CROWLEY- DIPLOMATS ARE DIPLOMATS, THAT IS THEIR JOB. DIPLOMATS ARE NOT INTELLIGENCE ASSETS. I’M RELUCTANT TO TALK ABOUT ANY PARTICULAR DOCUMENT. BUT JUST BECAUSE, AS I SAID, BY TRADITION ANY DOCUMENT THAT LEAVES THE DEPT OF STATE HAS THE SECRETARY OF STATE’S NAME ON IT. SHE IS RESPONSIBLE BUT SHE’S NOT THE AUTHOR OF THAT PARTICULAR DOCUMENT. AND THE CONTENTS OF THAT CAME FROM OUTSIDE THE DEPT OF STATE. DIPLOMATS HAVE A DIFFICULT JOB. IT IS USEFUL FOR THEM TO KNOW WHAT IS OF INTEREST. BUT THIS DOESN’T CHANGE THE DAY-TO-DAY DUTIES.

THERE ARE ENTITIES IN OUR GOVT THAT HAVE CERTAIN RESPONSIBILITIES. IT IS ONE THING FOR THAT COMMUNITY TO PROVIDE A WISHLIST ACROSS THE GOV’T TO HELP PEOPLE UNDERSTAND WHAT’S USEFUL. IT TAKES A LEAP OF FAITH TO SAY THAT FUNDAMENTALLY CHANGES THE DAY-TO-DAY RESPONSIBILITIES OF OUR DIPLOMATS ...

MIKE HANNA– CLARITY HERE, YOU SAID THE CONTENTS DOCUMENT CAME FROM OUTSIDE THE STATE DEPT? DID YOU SAY THAT?

PJ CROWLEY: I DID. AGAIN I’M NOT GOING TO TALK ABOUT THE PARTICULARS OF THE DOCUMENT. LOOK GUYS, I’VE SAID ALL I’M GOING TO SAY ABOUT THIS.

So the position as outlined here is that some other agency - neither state department nor the secretary herself - is responsible for the directive. It would appear a transparent attempt to shift blame for a document that instructs diplomats to break the law.

However, the name of the person that apportioned the level of security classification to the document is Michael Owens. He happens to be the acting director of the INR - the Bureau of Intelligence and Research. This is an agency that is described as "the primary source in the state department for interpretive analyses of global developments and focal point for policy issues and activities of the Intelligence Community".

Note the phrase "in the state department". This is not an outside agency; it is part of the department.

Amidst all of this apparent misdirection two clear possibilities emerge: either the secretary of state did know about the instructions and they were issued with her authority - in which case she has solicited criminal action - or she did not know about the instructions sent in her name in which case she could be accused of gross incompetence or negligence.

Whichever way one looks at it, the cable raises huge issues about the probity or competence of the secretary of state – and the matter will not go away.