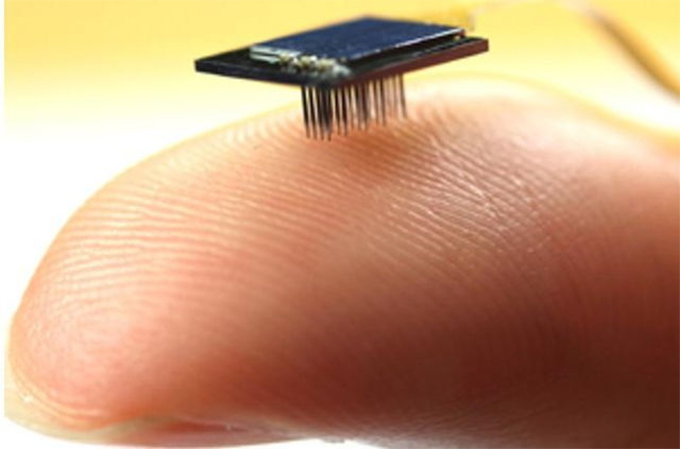 For decades, DARPA, the secretive research arm of the Department of Defense, has dreamed of turning soldiers into cyborgs. And now it’s finally happening. The agency has funded projects that involve implanting chips into soldiers’ brains that could one day enhance performance on the battlefield and repair traumatized brains once the fog of war has lifted.

“Of the 2.5 million Americans who served in Iraq and Afghanistan, 300,000 of them came home with traumatic brain injury,” journalist Annie Jacobsen told NPR. “DARPA initiated a series of programs to help cognitive functioning, to repair some of this damage. And those programs center around putting brain chips inside the tissue of the brain.”

In her new book about the history of DARPA, “The Pentagon’s Brain,” Jacobsen writes about DARPA’s “classified brain programs.” Scientists, she says, are already testing “implantable wireless ‘neuroprosthetics'” to help soldiers with brain injuries. “[S]oldiers allow the tiny machines, or chips, to be implanted in their brain,” Jacobsen writes in the book. “Despite multiple appeals through the Office of the Secretary of Defense, DARPA declined to grant me an interview with any of these brain-wounded warriors.”

>A DARPA spokesperson told Fusion that “brain-neural interfaces” have not been implanted in soldiers, though researchers have already begun testing such devices by temporarily implanting electrical arrays into the brains of volunteers undergoing surgery for other neurological issues. Defense One, an online magazine that covers the military, reported last year on DARPA’s work on brain chips to treat PTSD, and said that DARPA was not yet in the testing phase. When DARPA launched its RAM (Restoring Active Memory) program last year, it projected it would be about four years until researchers were implanting permanent chips in humans.

Creating super soldiers isn’t the only thing that DARPA is trying to do, Jacobsen says. According to her new book, published by Little, Brown, government scientists hope that implanting chips in soldiers will unlock the secrets of artificial intelligence, and allow us to give machines the kind of higher-level reasoning that humans can do.

“When you see all of these brain mapping programs going on, many scientists wonder whether this will [be what it takes] to break that long-sought barrier of AI,” said Jacobsen in a phone interview.

For Jacobsen, who has spent her career chronicling war, weapons and U.S. government secrets, digging through DARPA documents provided a glimpse at the future of war, but also raised questions about whether that future is one we really want.

“Are hunter-killer robots right around the bend?” she writes in the book..

Since the collapse of the Soviet Union in the 1990s, the Defense Advanced Research Projects Agency has poured resources into far-out research, from solving infectious disease to transforming humans for the theater of war. The agency is pioneering Iron Man-like exoskeletons to help protect soldiers from fire and the elements so they can keep fighting for longer. And under initiatives like the Brain-Machine Interface, defense scientists have studied how brain implants could eventually enhance a soldier’s cognition.

The brain emits electrical signals and an implanted chip can tap into those signals to read them. Outside of the government, scientists at places like Berkeley’s Brain-Machine Interface Systems Laboratory are experimenting with how to use such implants to translate thoughts into action for people with neurological impairments, eventually hoping to, for example, help a paralyzed person move.

“Imagine a time when the human brain has its own wireless modem so that instead of acting on thoughts, warfighters have thoughts that act,” Jacobsen recounts DARPA’s Eric Eisenstadt telling a crowd at a technology conference in 2002.

But Jacobsen’s warning is that while helping soldiers suffering in the aftermath of war may seem inherently benign, we must not forget that DARPA is in the business of defense. The question that should punctuate everything DARPA does, Jacobsen suggests, is “How can this be weaponized?”

DARPA’s spokesperson told Fusion that the main goal of its brain-related work is not offensive military applications, but to develop therapeutic devices for soldiers and veterans.

“Suggesting that we aim to develop ‘super soldiers’ or that our brain-related research is being conducted to ‘unlock the secrets of artificial intelligence’ is patently false,'” he said.

Understanding the human brain is as important to achieving artificial intelligence as understanding computers. “The Pentagon is clearly very confident that they’re moving toward autonomous weapons,” Jacobsen told me. “The question is where is that confidence coming from?”