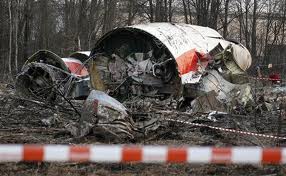 Polish investigators found traces of explosives on the wreckage of the government jet that crashed in Russia two years ago, killing Poland’s president and 95 others, daily Rzeczpospolita reported on Tuesday.

Without citing sources, the newspaper said prosecutors and explosive experts who examined the remains of the plane in Russia found signs of TNT and nitroglycerin on the wings and in the cabin, including on 30 seats.

Traces of explosives were also found in the area where the Tu-154 crashed during its approach to a small airport near the Russian city of Smolensk on April 10, 2010, the daily reported.

Poland’s military prosecutor’s office plans to respond to the report later on Tuesday, its spokesman said.

Russian investigators had blamed the Polish crew for trying to land in heavy fog, while their Polish counterparts also said the airport controllers should not have allowed the plane to attempt an approach.

Some rightist groups in Poland, including main opposition party Law and Justice, had rejected the findings and suggested the crash could have been an assassination of President Lech Kaczynski and political and military leaders who flew with him.

In their official reports, investigators said they found no proof of the involvement of third parties.

The investigators have not ruled out the possibility that the traces of explosives come from unexploded bombs dating back to World War Two that could have remained in the area where the aircraft came down, the newspaper said.