Watch how this works. 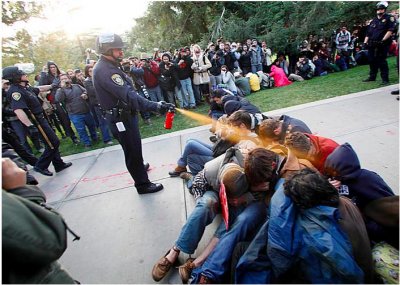 First, the government responds to the September 11th attack by passing the Patriot Act, which is purportedly designed to protect us from foreign terrorists. Most of America cheers it on, never realizing that within the act is a broad definition for something categorized as domestic terrorism, or “activities that appear to be intended to intimidate or coerce a civilian population, or to influence the policy of a government by intimidation or coercion.”

Second, they pass the National Defense Authorization Act, which allows them, under the definitions for domestic terrorism set forth by the Patriot Act, to detain someone without trial and forever if they appear to be subverting the newly established status quo.

Third, they declare all federal property, or property being used for political events where Secret Service protection is present, as “events of national significance” through the Federal Restricted Buildings and Grounds Improvement Act. Undesirable demonstrators operating counter to the official narrative in these areas are herded into court approved free speech zones.

Finally, once the new laws are in place, the government security apparatus begins the re-education of its minions by labeling as “terrorists” anyone who dares speak out or disagrees with their new policy initiatives.

This last step is and has been happening for some time.

Even the very act of assembling with other like minded people to influence policy by petitioning the Government for a redress of grievances can land you on the domestic terrorism list:

A written exam administered by the Pentagon labels “protests” as a form of “low-level terrorism” — enraging civil liberties advocates and activist groups who say it shows blatant disregard of the First Amendment.

The written exam, given as part of Department of Defense employees’ routine training, includes a multiple-choice question that asks:

“Which of the following is an example of low-level terrorism?”

The correct answer, according to the exam, is “Protests.”

“Its part of a pattern of equating dissent and protest with terrorism,” said Ann Brick, an attorney with the American Civil Liberties Union, which obtained a copy of the question after a Defense Department employee who was taking the test printed the screen on his or her computer terminal.

“It undermines the core constitutional values the Department of Defense is supposed to be defending,” Brick said, referring to the First Amendment right to peaceably assemble.

“That’s illegal,” said George Martin, national co-chairman of United for Peace and Justice. “Protest in terms of legal dissent has to be recognized, especially by the authorities.

“It’s not terrorism or a lack of patriotism. We care enough to be active in our government.”

“It’s the kind of thing that happens when you have large security bureaucracies, which is why they need to be kept in check,” Friedman said. “These things tend to occur in times of panic, like after Sept. 11.”

After many years of a slow but steady erosion of our right to speak freely, to assemble peaceably, to bear arms, to be safe and secure in our persons, and to be given due process in a court of law, we begin to see the sinister end game emerge.

Our entire system of government, the one established by our Founding Fathers, is being systematically dismantled.