Fish Literally Rain Down On Australian Outback...Not Once, But Twice! 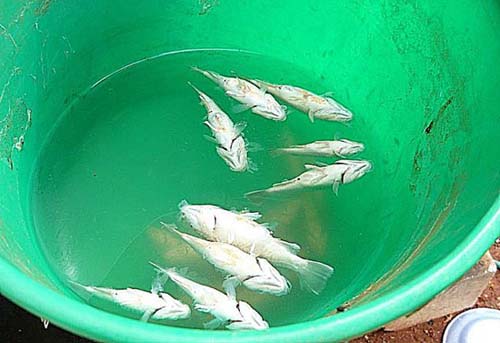 While the Top End and Central Australia have been battered by torrential rains, a Territory town has had fish falling from the sky.

The freak phenomena happened not once, but twice, on Thursday and Friday afternoon about 6pm at Lajamanu, about 550km southwest of Katherine.

Newsbreaker Christine Balmer, who took these photos of the fish on the ground and in a bucket, had to pinch herself when she was told ``hundreds and hundreds" of small white fish had fallen from the sky.

"It rained fish in Lajamanu on Thursday and Friday night," she said, "They fell from the sky everywhere.

"Locals were picking them up off the footy oval and on the ground everywhere.

"These fish were alive when they hit the ground."

Mrs Balmer, the aged care co-ordinator at the Lajamanu Aged Care Centre, said her family interstate thought she had lost the plot when she told them about the event.

"I haven’t lost my marbles," she said, reassuring herself. "Thank god it didn’t rain crocodiles."

Lajamanu sits on the edge of the Tanami Desert, hundreds of kilometres from Lake Argyle and Lake Elliott and even further from the coast. But it’s not the first time the remote community has been bombarded by fins from above.

In 2004, locals reported fish falling from the sky, and in 1974, a similar incident captured international headlines.

The small white fish are believed to be spangled perch, which are very common through much of northern Australia.

Weather bureau senior forecaster Ashley Patterson said the geological conditions were perfect on Friday for a tornado in the Douglas Daly region.

He said it would have been an ideal weather situation to allow the phenomena to occur - but no tornados have been reported to the authority.

"Or possibly from a tornado over a large water body - but we haven’t had any reports," he said.