Frankenfish coming to a store near you 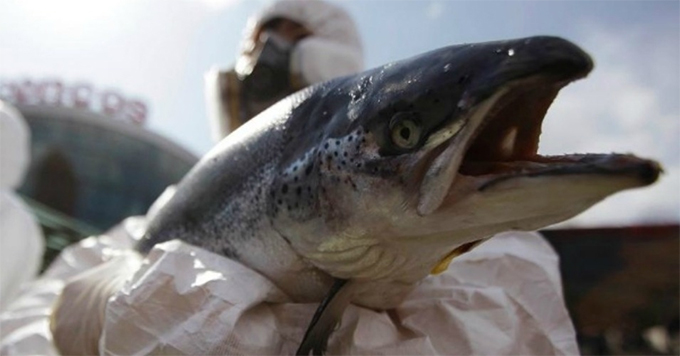 The Food and Drug Administration on Thursday approved the first Atlantic salmon that is genetically engineered. The decision comes as critics charge the so-called "frankenfish" is unsafe and could harm the environment.

AquAdvantage Salmon has a genetically created trait that makes the salmon grow faster than regular salmon. The manufacturer had to go through an approval process to ensure the fish was safe to eat.

The "frankenfish" had to meet several requirements beyond safety rules. For instance, the fish can be raised only in land-based tanks in Canada and Panama and cannot be produced in the U.S.

The agency cited several measures that are being taken to contain the fish and prevent their escape into open water.

Sen. Lisa Murkowski, R-Alaska, said she was in "shock" at the FDA's approval, saying that genetically engineered fish could harm the environment and may be unsafe.

The senator, who hails from a state with a robust seafood industry, said such salmon "seems to be more science experiment than fish or food."

"Now that the decision has been made, the next step is to ensure that Americans know what they are consuming," she said.

Murkowski has introduced a bill and an amendment in an appropriations bill to mandate the labeling of genetically engineered fish.

Genetically modified organisms in food have become an incredibly heated issue with activists pushing for such food to be labeled because it may be unsafe. However, there isn't definitive scientific proof that such foods are unsafe.

Several states have pushed for GMO labeling laws, but a House bill passed earlier this summer would restrict states from adopting them. The bill has yet to get a vote in the Senate.