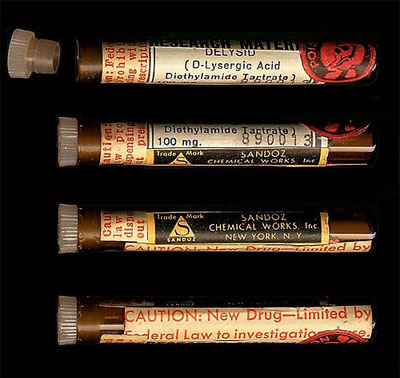 A major diplomatic and political scandal is erupting that could have significant import for French-American relations. It involves new research into the mysterious outbreak of "mass insanity" in a village in southern France that affected some 500 people and resulted in five deaths.

According to reliable US sources, the US State Department Bureau of Intelligence and Research has been given a confidential inquiry from the office of Erard Corbin de Mangoux, head of the French intelligence agency DSGE (Directorate General for External Security). According to the report the inquiry regards a recently-published account of U.S. government complicity in a mysterious 1951 incident of mass insanity in France in the village of Pont-Saint-Esprit in southern France.

The strange outbreak severely affected nearly five hundred people, causing the deaths of at least five, two by suicide. For nearly 60 years the Pont-St.-Esprit incident has been attributed either to ergot poisoning, meaning that villagers consumed bread infected with a psychedelic mold or to organic mercury poisoning.

Scientists with the highly respected British Medical Journal were quickly drawn in September 1951 to what it dubbed the "outbreak of poisoning." After initial thoughts that the cause was bread infection, they concluded that mold could not explain the event or the afflictions that struck hundreds of people in the village.

Scientists dispatched to the scene from the Sandoz Chemical company in nearby Basle, Switzerland also stated that the mold was the cause, but many other experts disagreed with them.

Over time the mystery of the outbreak only deepened and no answers were found to be satisfactory. A 2008 book about the history of bread published in France by Professor Steven Kaplan emphasizes that the "mystery remains unsolved" and at the time, still continued to perplex scientists.

A book just released in the United States, detailing exhaustive interviews with now-retired US intelligence personnel who had direct knowledge of the 1951 French events, charges that the until-now unexplained "mass insanity" in the remote village were, rather, a top-secret CIA experiment conducted under the code-name Operation Span. Operation Span was a part of Project MK/NAOMI, itself an adjunct project to the more notorious Project MK/ULTRA, as in "ultra-top secret."

The book, A Terrible Mistake: The Murder of Frank Olson and the CIA's Secret Cold War Experiments, by investigative journalist H.P. Albarelli Jr. documents that the Pont-St.-Esprit outbreak in 1951 was the result of a covert LSD aerosol experiment directed by the US Army's top-secret Special Operations Division at Fort Detrick, Maryland.

Albarelli notes that the scientists who produced the bogus cover-up explanations of contaminated bread and or mercury poisoning to deflect from the real source of the events worked for the Sandoz Pharmaceutical Company, which was then secretly supplying both the US Army and CIA with LSD for research.

A French newspaper at the time of the bizarre events wrote, "It is neither Shakespeare nor Edgar Poe. It is, alas, the sad reality all around Pont-St.-Esprit and its environs, where terrifying scenes of hallucinations are taking place. They are scenes straight out of the Middle Ages, scenes of horror and pathos, full of sinister shadows." The US Time magazine, whose publisher, Henry Luce was closely tied to CIA propaganda activities in the 1950's wrote, "Among the stricken, delirium rose: patients thrashed wildly on their beds, screaming that red flowers were blossoming from their bodies, that their heads had turned to molten lead. Pont-Saint-Esprit's hospital reported four attempts at suicide."

As Albarelli notes, a Department of Justice website on the dangers of LSD states that in the early 1950s, "the Sandoz Chemical Company went as far as promoting LSD as a potential secret chemical warfare weapon to the US Government. Their main selling point in this was that a small amount in a main water supply or sprayed in the air could disorient and turn psychotic an entire company of soldiers leaving them harmless and unable to fight."

He claims that the CIA entertained a number of proposals from American scientists concerning placing a large amount of LSD into the reservoir of a medium-to-large city, but, according to former agency officials, "the experiment was never approved due to the unexpected number of deaths during the operation in France."

Indeed, Albarelli has discovered once secret FBI documents that reveal that the Fort Detrick's Special Operations Division, a year prior to the Pont St. Esprit experiment, had targeted New York City's subway system for a similar experiment. States an August 1950 bureau memo, "[The] BW [biological warfare] experiments to be conducted by representatives of the Department of the Army in the New York Subway System in September, 1950, have been indefinitely postponed." The memo goes on to cite FBI concerns about "poisoning of food plants" and the "poisoning of the water supply" of large cities in the U.S.

In an interview with this author, Albarelli described how he developed the shocking details of the CIA secret drug programs: "My first tip-off was a 1954 CIA document that detailed an encounter between an official of the Sandoz chemical company (the producers of LSD) and a CIA official in which 'the secret of Pont St. Esprit' was referenced. The Sandoz official went on to say, 'It was not the ergot at all.'"

Albarelli says he then obtained through the Freedom of Information Act a partially redacted 1955 CIA report entitled, A CIA Study of LSD-25. "That seemingly comprehensive report contained detailed information on the manufacture, supply, and use of LSD and LSD-type products worldwide. However, nearly its entire section on France and Pont St. Esprit were blacked out." Albarelli requested an un-redacted copy but CIA officials refused to provide one.

He continued, "Then I came across a letter written by a Federal Bureau of Narcotics agent who was working secretly for the CIA; this was George Hunter White, who ran the CIA's New York City safe house in 1951-1954. White's letter referenced the Pont St. Esprit experiment. At that point, 5 years into my investigation, I began interviewing former Army biochemists who became very evasive and refused to talk about their work in France. Finally two former intelligence employees confirmed the experiment took place under the auspices of the Army's Special Operations Division and with CIA funding."

Lastly, Albarelli explained, "I was given an undated White House document that was part of a larger file that had been sent to members of the Rockefeller Commission formed in 1975 to investigate CIA abuses. The document contained the names of a number of French nationals who had been secretly employed by the CIA and made direct reference to the 'Pont St. Esprit incident,' linking the former OSS head of secret research projects and the chief of Fort Detrick's Special Operations Division," Said Albarelli. "This, along with one other document, comprised the smoking gun."

In its quest to research LSD as an offensive weapon, Albarelli claims, the Army drugged over 5,700 unwitting American servicemen between the years 1953 and 1965, and, with the CIA, experimented widely with LSD and other drugs through secret contracts with over 325 colleges, universities and research institutions in the U.S., Canada and Europe, involving about 2,500 additional subjects, many of them hospital patients and college students.

In 2005, Scott Shane, a reporter with the Baltimore Sun newspaper, wrote, "The Army has no records on MKNAOMI or on the Special Operations Division." Asked formally for such records, the Army replied they "could find none." In 1973 the CIA destroyed all of its records on MKNAOMI and its work with Fort Detrick's Special Operations Division. When Shane asked a former top ranking Special Operations officer to speak about the division's projects in general, Andrew M. Cowan, Jr. said, "I just don't give interviews on that subject. It should still be classified-if nothing else, to keep information the division developed out of the hands of some nut."

In 1959, American writer, Ken Kesey, while a student at Stanford University volunteered to take part in the CIA-financed Project MK/ULTRA at the Menlo Park Veterans Hospital. The project studied the effects of psychoactive drugs, particularly LSD, psilocybin, mescaline, cocaine, AMT, and DMT on people. Kesey wrote detailed accounts of his experiences with these drugs during the Project MK/ULTRA study. Kesey's role as a medical guinea pig reportedly inspired him to write One Flew Over the Cuckoo's Nest in 1962.

From his days as a psychology graduate student, Harvard's infamous LSD guru, Dr. Timothy Leary, whose motto to the 1968 "Flower Power" generation was "Turn On, Tune In, Drop Out!," was associated with the CIA's Cord Meyer. Leary devised a special personality test, The Leary, used by the CIA to test potential employees and worked with Frank Barron, a CIA employee and former psychology classmate of Leary's, at the Berkeley Institute for Personality Assessment and Research, and later with Barron's Psychedelic Drug Research Center at Harvard. These are but two of the more known and detailed instances linking the CIA with LSD projects after the alleged French experiments.

According to an official with the DGSE, who declined to be identified, "If the details of this book's revelations prove to be true, it will be very upsetting for the people of Pont-St.-Esprit, as well as all French citizens. That agencies of the United States government would deliberately target innocent foreign citizens for such an experiment is a violation of a number of international laws and treaties."