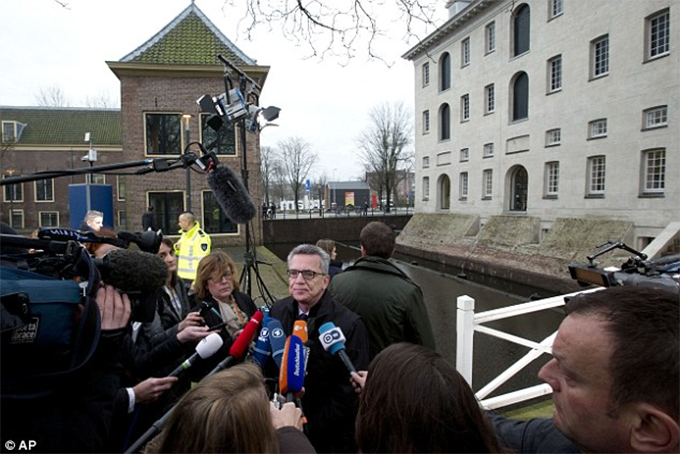 The German government on Wednesday banned a far-right Internet platform that it accused of spreading "racist, xenophobic, anti-Semitic, homophobic and anti-Islamic content," and federal prosecutors said two people were arrested.

The ban on the Altermedia Deutschland platform is "a clear sign that the rule of law doesn't allow hate crime," Interior Minister Thomas de Maiziere said.

The prosecutors' office said that two Germans, identified only as Jutta V. and Ralph Thomas K. in line with German privacy rules, were arrested on suspicion of founding a criminal organization and incitement. Three other suspects weren't arrested.

Raids were conducted in homes in four German states and the northeastern Spanish town of Lloret de Mar.

The two arrested people were the administrators of the Altermedia website and therefore responsible for its content, which included banned Nazi slogans and the denial of the Holocaust as well as incitement of violence against foreigners, the prosecutors' office said.

The server was located in Russia to prevent German authorities gaining access, it added. German officials asked Russia to switch it off in the coming days.

German security officials say that the far right has become much more savvy in using of the Internet and social media to push its message to a broader audience.

The head of Germany's domestic intelligence, Hans-Georg Maassen, told reporters Tuesday that "there is the danger of a gray zone developing between far-right extremists, right-wing conservatives and citizen protesters with significant potential for violence."

Editor's note: Oh my, Germany is entering into another period of harsh censorship. They are now "burning websites" instead of books. They are shutting down freedom of speech and freedom of expression. Who will we see defend these guys from voicing their opinions?