Has The Roman Dodecahedron Mystery Been Solved? 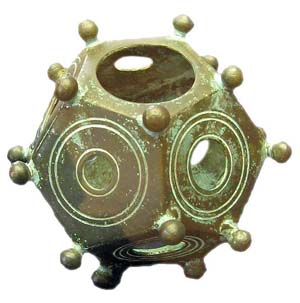 Though more than 100 of the strange objects are known to exist, their purpose remains a puzzling mystery that has perplexed archaeologists since their first discovery.

All throughout Europe, small geometric objects known as Roman dodecahedrons have been recovered. As far north as Wales, and further south toward the Mediterranean, the dodecahedrons, usually made of bronze or stone, are seldom larger than about eight to ten centimeters in size. So what was their purpose?

Part of what has led to their mystery has been the speculation surrounding their use, as no classical accounts or narratives seem to mention them, let alone offer any explanation for what purpose they may have served. Among the leading theories about their practical use, archaeologists have guessed that they might be everything form gaming objects similar to multi-sided dice used in modern role playing games, to items intended to hold candlesticks or other objects. Others have speculated that they may hold religious or cultural significance, and some have gone so far as to presume they could have been useful in determining the proper times for planting various crops throughout the year.

In many cases where perplexing ancient mysteries are observed and considered by modern science, we tend to project complex scientific possibilities onto the circumstances, leading to wild speculation ranging from things like “ancient alien theory” to ancient power plants nestled within monuments like the pyramids. It is not always demeaning to suppose that in many cases, there could be a simpler explanation… and indeed, one that could have been far more practical to the ancient way of life.

And for one man, this kind of practical thinking led him to finding a unique use for the Roman dodecahedrons… as well as a possible solution to their creation in ancient times.

Read the full article at: gralienreport.com