Jul 9, 2013 By Henrik Palmgren | redice.tv
Red Ice Creations: As robotics and sophisticated high-speed computers become more proficient, capable of making millions of decisions a second, and are commonly being used in global markets, it might be wise to pose questions:

In the high-stakes world of high frequency trading are powerful computers squeezing out more and more human analysts?
What will happen to world markets when they’re controlled exclusively by computers?
Who ultimately controls these bots, and where is the generated wealth being amassed?
Are economies being lead by an ever-narrowing collection of people who control the ’minds’ of the markets?
What if a crash were to happen?
What if a crash were MADE to happen?

As demonstrated in the following articles, in the world of money, the robots have gained supremacy. 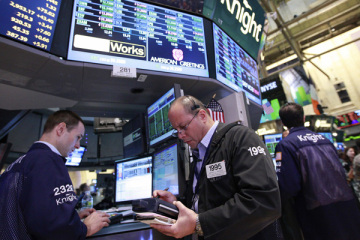 Another week, another Wall Street scandal, and another opportunity for pundits to bemoan the incompetence and venality of America’s financial professionals. Last Wednesday’s near collapse of Knight Capital Partners – in which a bug in one of its high-frequency trading algorithms caused the firm too loose $440 million – has raised concerns about high frequency trading and what the practice means for the safety and trustworthiness of our financial markets. But what is high-frequency trading, and is it really all that dangerous?

High frequency trading is a catch-all term that describes the practice of firms using high-powered computers to execute trades at very fast speeds – sometimes thousands or millions of trades per second. These systems have developed over the past ten years, and began to really dominate Wall Street over the last five. For example, a high-frequency trader might try to take advantage of miniscule differences in prices between securities offered on different exchanges: ABC stock could be offered for one price in New York and for a slightly higher price in London. With a high-powered computer and an “algorithm,” a trader could buy the cheap stock and sell the expensive one almost simultaneously, making an almost risk-free profit for himself.

At first blush, it appears high-frequency traders have done what market observers generally like, which is increase the amount of trading going on at any given time (what traders call volume) and the ease with which someone can buy or sell a given security (commonly known as liquidity). Basically high-speed traders add to the overall action in a market, which, at least theoretically, is supposed to make markets more accurate and efficient.

But not everyone agrees that the thousands of extra trades per second that some computer algorithms are executing are actually all that good for the market. In a recent paper titled, “The Dark Side of Trading,” Emory University accounting professor Ilia D. Dichev argues that while some high-frequency trading can be beneficial, the scope of high-frequency activity in the market today — which accounts for up to 70% of all trades by some estimates — has drowned out the input from more traditional investors who partake in good-old-fashioned “fundamental” analysis of companies, i.e. the analysis of financial statements and business plans.

When only a small minority of market participants are trading on actual information about the companies they are buying and selling, and the rest are trading on what computer programs think about those participants actions, the market can become unmoored from fundamentals, more volatile and less efficient.

Perhaps even more problematic, high-speed trading systems may also pose risks to the stability of the overall financial system. The Knight Capital incident last week showed how the speed and power of the computers can amplify a small glitch to disastrous effect. The details of what exactly went wrong with one of Knight Capital’s computer programs are as yet unknown, but whatever the problem was, it only took 30 minutes for the problem to cause more hundreds of millions of dollars in losses and put the firm at risk of bankruptcy.

As you can imagine, this kind of stuff leads to systemic dangers. If a similar incident were to fell a systemically important financial institution, it could theoretically put the entire economy at risk. The so-called “flash crash” of 2010, when the Dow Jones lost more than 1,000 points in a matter of minutes, was caused by glitches in high-frequency trading systems — and since that time issues with the Facebook and BATS IPOs have shown that these sorts of bugs are all too common on Wall Street. Dave Cliff, a computer science professor at the University of Bristol and one-time pioneer of high-frequency trading systems, is worried about just this sort of danger. In an interview with HFT Review, in December, he warned of the systemic issues that the increased computerization of our financial system poses:

“One of the things that we have focused on . . . for the last five years is the extent on which the global financial markets are now essentially a single, planetary-wide, ultra-large scale complex IT system . . . The 6th May Flash Crash was the first real sign that actually our concern was justified, that events could happen at an unprecedented scale, in terms of the magnitude of the drop and the speed at which it happened.”

Read the full article at: time.com
How the Robots Lost: High-Frequency Trading’s Rise and Fall
By Matthew Philips | BusinessWeek

[...]According to Rosenblatt, in 2009 the entire HFT industry made around $5 billion trading stocks. Last year it made closer to $1 billion. By comparison, JPMorgan Chase (JPM) earned more than six times that in the first quarter of this year. The “profits have collapsed,” says Mark Gorton, the founder of Tower Research Capital, one of the largest and fastest high-frequency trading firms. “The easy money’s gone. We’re doing more things better than ever before and making less money doing it.” 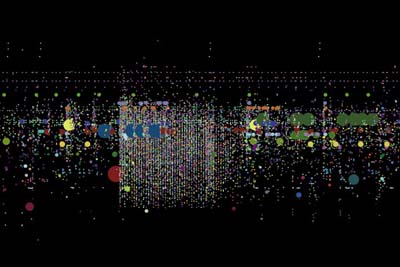 “The margins on trades have gotten to the point where it’s not even paying the bills for a lot of firms,” says Raj Fernando, chief executive officer and founder of Chopper Trading, a large firm in Chicago that uses high-frequency strategies. “No one’s laughing while running to the bank now, that’s for sure.” A number of high-frequency shops have shut down in the past year. According to Fernando, many asked Chopper to buy them before going out of business. He declined in every instance.

One of HFT’s objectives has always been to make the market more efficient. Speed traders have done such an excellent job of wringing waste out of buying and selling stocks that they’re having a hard time making money themselves. HFT also lacks the two things it needs the most: trading volume and price volatility. Compared with the deep, choppy waters of 2009 and 2010, the stock market is now a shallow, placid pool. Trading volumes in U.S. equities are around 6 billion shares a day, roughly where they were in 2006. Volatility, a measure of the extent to which a share’s price jumps around, is about half what it was a few years ago. By seeking out price disparities across assets and exchanges, speed traders ensure that when things do get out of whack, they’re quickly brought back into harmony. As a result, they tamp down volatility, suffocating their two most common strategies: market making and statistical arbitrage.

Market-making firms facilitate trading by quoting both a bid and a sell price. They profit off the spread in between, which these days is rarely more than a penny per share, so they rely on volume to make money. Arbitrage firms take advantage of small price differences between related assets. If shares of Apple (AAPL) are trading for slightly different prices across any of the 13 U.S. stock exchanges, HFT firms will buy the cheaper shares or sell the more expensive ones. The more prices change, the more chances there are for disparities to ripple through the market. As things have calmed, arbitrage trading has become less profitable.

To some extent, the drop in volume may be the result of high-frequency trading scaring investors away from stocks, particularly after the so-called Flash Crash of May 6, 2010, when a big futures sell order filled by computers unleashed a massive selloff. The Dow Jones industrial average dropped 600 points in about five minutes. As volatility spiked, most high-frequency traders that stayed in the market that day made a fortune. Those that turned their machines off were blamed for accelerating the selloff by drying up liquidity, since there were fewer speed traders willing to buy all those cascading sell orders triggered by falling prices.

For two years, the Flash Crash was HFT’s biggest black eye. Then last August, Knight Capital crippled itself. Traders have taken to calling the implosion “the Knightmare.” Until about 9:30 a.m. on the morning of Aug. 1, 2012, Knight was arguably one of the kings of HFT and the largest trader of U.S. stocks. It accounted for 17 percent of all trading volume in New York Stock Exchange (NYX)-listed stocks, and about 16 percent in Nasdaq listings among securities firms.

When the market opened on Aug. 1, a new piece of trading software that Knight had just installed went haywire and started aggressively buying shares in 140 NYSE-listed stocks. Over about 45 minutes that morning, Knight accidentally bought and sold $7 billion worth of shares—about $2.6 million a second. Each time it bought, Knight’s algorithm would raise the price it was offering into the market. Other firms were happy to sell to it at those prices. By the end of Aug. 2, Knight had spent $440 million unwinding its trades, or about 40 percent of the company’s value before the glitch.

Europeans are already clamping down on speed traders. France and Italy have both implemented some version of a trading tax. The European Commission is debating a euro zone-wide transaction fee.

In the U.S., Bart Chilton, a commissioner of the CFTC, has discussed adding yet more pressure. At the Boca conference the evening after the meeting took place, sitting at a table on a pink veranda, he explained his recent concern. According to Chilton, the CFTC has uncovered some “curious activity” in the markets that is “deeply disturbing and may be against the law.” Chilton, who calls the high-frequency traders “cheetahs,” said the CFTC needs to rethink how it determines whether a firm is manipulating markets.

Under the CFTC’s manipulation standard, a firm has to have a large share of a particular market to be deemed big enough to engage in manipulative behavior. For example, a firm that owns 20 percent of a company’s stock might be able to manipulate it. Since they rarely hold a position longer than several seconds, speed traders might have at most 1 percent or 2 percent of a market, but due to the outsize influence of their speed, they can often affect prices just as much as those with bigger footprints—particularly when they engage in what Chilton refers to as “feeding frenzies,” when prices are volatile. “We may need to lower the bar in regard to cheetahs,” says Chilton. “The question is whether revising that standard might be a way for us to catch cheetahs manipulating the market.”

Recently the CFTC has deployed its own high-tech surveillance system, capable of viewing market activity in hundredths of a second, and also tracing trades back to the firms that execute them. This has led the CFTC to look into potential manipulation in the natural gas markets and review something called “wash trading,” where firms illegally trade with themselves to create the impression of activity that doesn’t really exist.

Read the full article at: businessweek.com