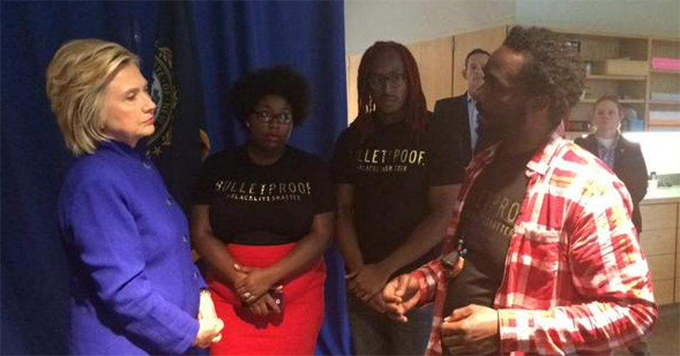 Hillary Clinton had a tense run-in with members of Massachusetts chapters of the Black Lives Matter movement earlier this month, a newly released video reveals.

The three activists, who were initially denied entrance to the August 11 campaign event in New Hampshire, discussed race issues at length and at one point accused Clinton of 'victim blaming' and claimed that there has always been a 'white problem of violence'.

Toward the end of the exchange, which focuses on Clinton changing her position on mass incarceration, the atmosphere becomes heated as the presidential candidate rejects her interviewer's charged accusations.

After insisting that she is committed to do whatever she can on race issues, Clinton challenges the activists to propose specific ideas for policy change.

But activist Julius Jones disagrees with that approach and says: 'If you don't tell black people what we need to do, then we won't tell you all what to do. What I mean to say is, this is and has always been a white problem of violence. there's not much that we can do to stop the violence against us.'

Clinton knocks him back, saying that if policies don't change, nothing will - and cut short a response in which Jones accuses her of victim blaming.

The tense discussion began when Clinton was questioned on her current stance of ending mass incarceration. In the 1990s, she called for stronger sentences and more prisons.

As the discussion continued, the videos, published by GOOD magazine, show that Clinton told the activists that the only way to effect change is through policy.

'You change laws, you change allocations of resources, you change the way systems operate. You're not gonna change every heart,' she says.

Following the video, Black Lives Matter activists Jones and Daunasia Yancey met with Melissa Harris-Perry of MSNBC and said that Clinton's responses were not sufficient.

Yancey said they were looking for a 'personal reflection on her responsibility for being part of the cause of this problem that we have today in mass incarceration', which Clinton didn't appear to show.

During the meeting, Jones asks Clinton how she is going to change the direction of the country and compared the US prison system to the plantation system.

'The prison plantation system. It's a similar thread. And until someone takes that message and speaks that truth to white people in this country, so that we can actually take on anti-blackness as a founding problem in this problem.'

Clinton nods in agreement before Jones claims that the mass incarceration of people is motivated by money.

Black Lives Matter Boston Organizer Daunasia Yancey said that she didn't find Clinton's responses sufficient, in her saying that the system can only be changed through policy

Yancey said that she wants 'personal reflection on [Clinton's] responsibility for being part of the cause of this problem that we have today in mass incarceration', as she called for stronger prison sentences in the 1990s

'What in your heart has changed that is going to change the direction of this country?' he asks. 'What in you, not your platform, not what you're supposed to say, how do you actually feel that is different than you did before?'

Clinton says that he had asked a 'very thoughtful question' and that it deserved a 'thoughtful answer'.

'I can only tell you that I feel very committed to and responsible for doing whatever I can,' she says..

'All I'm saying is your analysis is totally fair,' Clinton continues. 'It's historically fair, it's psychologically fair, it's economically fair. But you're going to have to come together as a movement and say here's what we want done about it.

'Because you can get lip service from as many white people you can pack into Yankee Stadium and a million more like it who are going to say, "We get it, we get it. We are going to be nicer". That's not enough in my book.'

But the video takes a tense turn after Jones claims that this has always been a 'white problem of violence'.

'If you don't tell black people what we need to do, then we won't tell you all what to do. What I mean to say is, this is and has always been a white problem of violence. there's not much that we can do to stop the violence against us,' he says.

Yancey (left) and Jones (right) spoke with MSNBC, on Monday and said they want Clinton to take responsibility for the policies she called for when she was the nation's First Lady

Though she called for stronger sentences and more prisons in the 1990s, in April Clinton announced that she wanted to put an end to mass incarceration

Clinton then pushes back at Jones with a new suggestion.

'Respectfully, if that is your position, then I will only talk to white people about how we are going to deal with these very real problems,' she says.

'That's not what I mean,' the activist responds.

'But, what you just said was a form of victim blaming. You were saying what the Black Lives Matter movement needs to do to is change white hearts is to...'

Clinton then claims that she doesn't believe in changing hearts.

She tells Jones that if policies don't change, they could be right back in the same place ten years from now.

'You can keep the movement going, which you have started, and through that you might change some hearts,' she says. 'But if that's all that happens, we'll be back here in ten years having the same conversation because we will not have all of the changes that you deserve to see happen in your lifetime because of your willingness to get out there and talk about this.'

Jones told MSNBC that the meeting with Clinton 'moves the conversation about race in the United States to a newer and deeper level'.

'Hillary Clinton has a unique responsibility in her role in mass incarceration,' he said. 'What we would like to see from the Clinton campaign is an intentionality in how she deals with that because right now she's talking around it.

'There needs to be some ownership and hopefully there can be some national ownership of the fact that there's white violence that occurs against the black community.

'We need to reverse that stream of funding from prisons back to low-income communities, especially black communities.'