Hive Mind: Robots will use their own ’internet’ to learn from each other

To be filed under: what-could-possibly-go-wrong?

RoboEarth is planning to demonstrate and test their robo-internet with assistant robots in a mock hospital setting. The robots will upload their accumulated data to an online ’Wikipedia-like’ cloud where other robots will have access to download, thus creating giant databanks of knowledge and a system of robot intercommunication and ’learning’.

(It sounds creepy, but based on the veracity of the information found on the human-operated Wikipedia, perhaps we don’t have much to fear after all?)

More about the robot hive-mind from UPI...

The robots will perform simple tasks in a hospital setting and upload their data to the cloud, which can then be used by other robots to perform similar tasks. 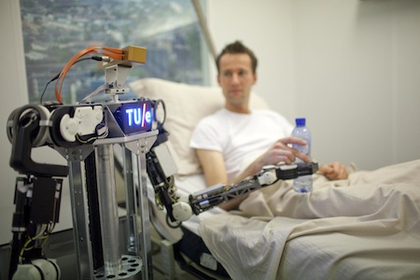 Robots will test RoboEarth, their own version of the world wide web, using it to communicate and learn new skills from each other in a mock hospital setting on January 16.

Developed at the Eindhoven University of Technology in Denmark, the cloud-based system can be described as a Wikipedia for robots and will be tested in a mock hospital setting. The robots will be tested on a number of tasks like serving drinks to patients, and uploading this data for use by other robots.

"At its core RoboEarth is a world wide web for robots: a giant network and database repository where robots can share information and learn from each other," said Rene van de Molengraft, RoboEarth project leader.

The four-year project, funded by the European Union, will reach its end this week in a public demonstration. The test will involve four robots working together to help a patient in a mock hospital setting.

In one test, a robot will upload a map of a room, which other robots will then use to navigate the room. The researchers said they are attempting to create an adaptive system that will help robots perform everyday tasks.

"The problem right now is that robots are often developed specifically for one task," van de Molengraft said.

One of the advantages of using a cloud-based system is that much of the required processing can be offloaded to the cloud, so that robots can perform less onboard computing and conserve battery power.

According to experts, robot assistants could be available to the public in the next 10 years, and there are already humanoids being developed capable of assisting the disabled and elderly.

READ: So It Begins: Darpa Sets Out to Make Computers That Can Teach Themselves

AND: Has mankind created a technical world that the mind cannot master or control?