How the Vatican sold its soul 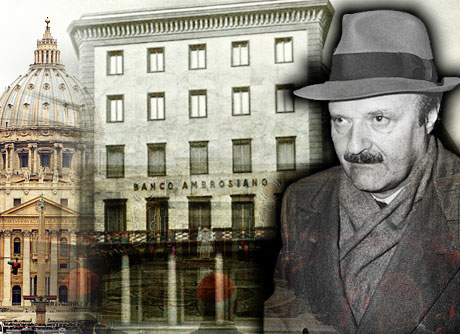 The Vatican appears to have an enduring vocation for Italian political and financial scandal. Secrecy and intrigue were the order of the day when American archbishop Paul Marcinkus held sway in the Bastion of Nicholas V, the medieval tower housing the Institute for the Works of Religion (IOR), the Vatican's central bank.

The requirements of a clandestine global struggle against atheist communism may explain the choice of business partners such as Michele Sindona and Roberto Calvi, whose mafia links and ruinous bankruptcies brought lasting discredit on the Catholic church three decades ago.

The Vatican hoped that a goodwill payment of $240m to the creditors of Calvi's Banco Ambrosiano's would salve its conscience and erase the memory of Marcinkus's inept and dishonest banking practices. We were led to believe that a new broom, wielded by the lay banker Angelo Caloia, had since swept the premises of the IOR.

The process of reform has been slower and more painful than previously thought, however, to judge by a new book, Vaticano Spa ("Vatican Ltd"), by the journalist Gianluigi Nuzzi. According to Nuzzi, despite the best efforts of Caloia, a cavalier attitude to financial ethics appears to have continued well into the 1990s, with huge political bribes being laundered through the IOR and funds donated for charitable purposes or to pay for masses for the souls of the dead being casually misappropriated by the bank's administrators.

Nuzzi's allegations are based on internal IOR documents, more than 4,000 in all, that were smuggled out of the Vatican by a disgruntled employee. This unique violation of IOR confidentiality was made possible by an unlikely whistleblower, Monsignor Renato Dardozzi. An electronic engineer who held a top job at the state telecommunications company, Dardozzi discovered his vocation late in life and was ordained a priest at the age of 52.

He worked in the IOR under Marcinkus, participated in the joint Vatican/Italian commission that examined the IOR's role in the Ambrosiano saga, and witnessed Caloia's uphill struggle against the personnel and practices of the Marcinkus era.

Monsignor Donato De Bonis, who served as secretary general under Marcinkus, continued to work under the new regime.

In 1987, according to Nuzzi, De Bonis set up the Cardinal Francis Spellman Foundation, with its own account at the IOR. Signatories on the account included De Bonis himself. During its first six years of operation the account received some 50bn lire (£22m) and paid out 43bn.

The choice of the staunchly anti-communist Spellman as "patron" of the fund is interesting. The well-connected cardinal of New York earned the sobriquet "money-bags" for his fund-raising skills and earmarked significant sums for Italy's Christian Democrat party during the cold war years.

The Spellman fund seems to have been administered by De Bonis with promiscuous generosity. A variety of convents and clerics were to benefit, with payments ranging from the modest 1m lire paid to five mother superiors, to the $50,000 sent to the auxiliary bishop of Skopje-Prizen, for the Albanian-speaking faithful, and the $1m delivered to Cardinal Lucas Moreira Neves, the archbishop of Sao Salvador de Bahia in Brazil.

There were also payments of a more personal nature: 100m lire for one of the lawyers of Giulio Andreotti, the veteran Christian Democrat politician, $134,000 for a conference on Cicero in New York sponsored by the former prime minister, and even a 60m lire payment to Severino Citaristi, a former treasurer of the Christian Democrat party convicted on corruption charges.

Part of the massive Enimont bribe, paid to politicians to secure their approval for a reorganisation of the chemicals sector, was also bounced through the Spellman fund, according to Nuzzi. But Caloia and Dardozzi chose discretion over transparency when questioned about it by prosecutors from Milan. "Despite the full collaboration promised and publicised in the press, they limit themselves to referring only what can no longer be concealed," Nuzzi writes.

It is interesting to note that Dardozzi's motive for turning whistleblower was not unalloyed disapproval of the IOR's unethical conduct. His decision to smuggle his secret archive out of the Vatican was motivated, at least in part, by anger at the institute's refusal to pay him a commission on the sale of a valuable real estate property near Florence. The unusual monsignor wanted to leave the money to his adoptive daughter, whose health condition required expensive hospital treatment.

Whatever the reason, Dardozzi's archive offers an unprecedented glimpse of the inner workings of one of the world's most secretive and unaccountable financial institutions. The idea that a noble end – winning the cold war or funding one's favourite charity – justifies almost any means, still seems to endure at the pope's bank in the Nicholas V Tower.

Philip Willan is the author of The Last Supper: The mafia, the Masons and the Killing of Roberto Calvi. His website is www.philipwillan.com