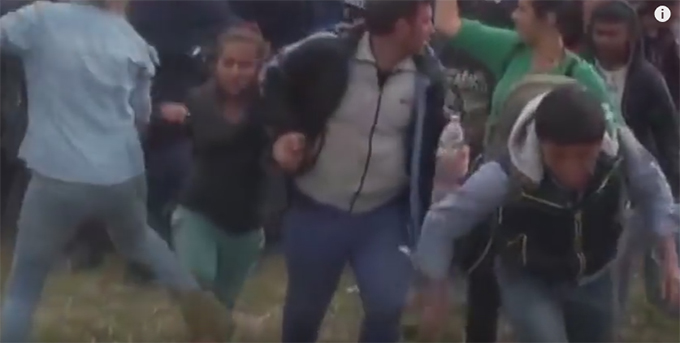 Editor's note: The woman got balls.Thank you Petra Lazlo for doing something, when most people just stand idle by, watching their countries being invaded.

A camera operator for a Hungarian nationalist television channel closely linked to the country’s far-right Jobbik party has been filmed kicking two refugee children and tripping up a man at the border hotspot of RÅ‘szke on Tuesday.

Petra László of N1TV was filming a group of refugees running away from police officers, when a man carrying a child in his arms ran in front of her. László stuck her leg out in front of the man, causing him to fall on the child he was carrying. He turned back and remonstrated with László, who continued filming.

A 20-second video of the scene was posted on Twitter by Stephan Richter, a reporter for the German television channel RTL and soon went viral, leading to the creation of a Facebook group “The Petra László Wall of Shame”.

N1TV said László had been dismissed due to “unacceptable behaviour”. The channel’s editor in chief Szabolcs Kisberk said in a statement posted on the station’s website: “The camerawoman’s employment has today been terminated with immediate effect, the case is now closed for us.”

As well as speeches made by the Jobbik leader Gábor Vona, the channel’s website also contains articles with such headlines as “migrants have swarmed all over the shops” and “Guantanamo = Hungary?”

Hundreds of angry comments appeared on the Facebook group set up to condemn László’s actions on Tuesday evening.

Opposition parties Együtt-PM and the Democratic Coalition have said that they will initiate charges of violence against a member of the community, which is punishable by up to five years in prison, against László.