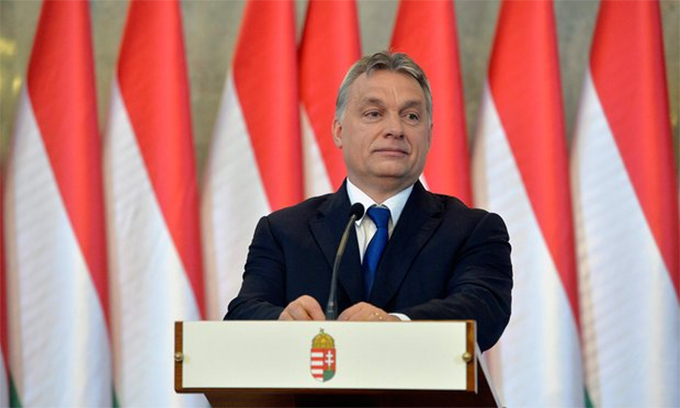 Hungary has called an anti-immigration referendum aimed at stopping Brussels and Berlin forcing it to take in refugees under any EU quota schemes.

The hardline prime minister, Viktor Orbán, called the plebiscite – and is certain to win it – in a preemptive strike against the European commission and the German chancellor, Angela Merkel, who are pushing for a permanent EU refugee quota system. The proposals will be fought over at two EU summits within three weeks.

Already divided over what to do about mass immigration, the EU faces further fragmentation on the issue as governments rush to impose national border controls from central Europe down to the Balkans, leaving Greece as the entry and end point for many migrants entering the EU from Turkey.

Orbán said the EU could not impose immigrant quotas on Hungary against the will of the the country’s parliament, which he controls completely through a sweeping majority of his Fidesz party. It was clear the referendum question would be loaded to reflect that argument.

The question on the ballot paper will ask whether “you are in favour of the EU being allowed to make the settlement of non-Hungarians obligatory in Hungary even if the parliament does not agree”. The ballot additionally asks whether voters are for mandatory quotas or for the independence of Hungary.

Since the immigration crisis started last year, Orbán has been the EU’s leading hardliner, sealing his country’s borders with razor wire, scorning Merkel’s open-door policies and attacking Brussels at every opportunity.

He refused to take part in an earlier one-off mandatory scheme distributing 160,000 refugees from Greece and Italy across the EU. Hungary and Slovakia are challenging the decision in the European court in Luxembourg. Orbán is also supported by Poland and the Czech Republic and increasingly elsewhere in Europe.

Anti-immigrant national border controls are going up everywhere from Sweden to Austria, and Greece is being partially sealed off from Europe’s free-travel Schengen zone, the survival of which is in doubt. Following Austria’s decision last week to allow in no more than eight asylumseekers daily, Slovenia is following suit and sending troops to its frontier with Croatia, while Belgium announced new border controls with France this week.

The numerous splits in Europe over immigration policy were fully evident on Wednesday when Austria unilaterally organised a meeting of interior and foreign ministers of several Balkan states in Vienna. The Austrians snubbed the Germans and did not invite the Greeks, provoking a furious reaction from Athens.

Vienna is also embroiled in a sharp-tongued row with the European commission over its border controls, dismissing Brussels’ objections as “nonsense”. The Vienna meeting was seen as the latest move to tighten the screws on Greece.

Merkel pressed last week for a special summit on 7 March with Turkey in an attempt to revive a faltering pact with Ankara that pays the Turks to stem the flow of refugees to Greece. It is not working. About 100,000 have made the Aegean crossing this year, 10 times more than in the same period last year, triggering panic and ever greater divisions among and between EU leaders.

Orbán and many others are strongly opposed to Merkel’s policies and to the Turkey pact. Instead, they want to quarantine Greece and seal the country’s northern border with Macedonia, effectively shifting Schengen’s external southern border from the Aegean to central Europe. The east Europeans, Austrians and Slovenes want to help the Macedonians close the Greek border.

In a speech to parliament this week, Orbán thundered against Brussels and Berlin. “Hungary is under enormous pressure,” he said, “[over] whether or not the EU will succeed in pushing a new EU asylum and migrant system down the throats of the central European countries, including ours. Such a system would authorise [the EU] to distribute migrants among the other EU countries, including those which have not taken in migrants, do not want to, are opposed to this and do not want any part in it.”