If you've done nothing wrong, you have everything to worry about 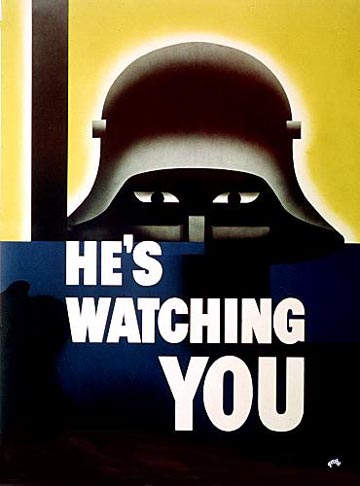 Whenever someone frets about the erosion of personal freedoms in our modern society, such as in the steady proliferation of surveillance cameras in public places, the stock answer, which is one I read all too often in my e-mail, is:

"If you haven't done anything wrong, you have nothing to worry about."

People who say this are fools, not to be too blunt about it. Not only are they willing to trade away my rights, since they haven't a basic appreciation of theirs, but their understanding of the relationship between government and the governed is one of subservience based on fear, and the idea that their fear is not only natural, but justifiably permanent given the state of the world.

Thus, we should all be fearful, all of the time. We should empower government to do whatever it feels necessary to protect us. The unquestioning nature of this logic not only institutionalizes fear, it makes it a patriotic duty. And the good citizen, the one who has done nothing wrong, will have nothing to worry about.

Out of Britain comes the case recently of 40-year-old Jenny Paton, mother of three and, in the eyes of the state, a security hazard. Her crime? She was suspected of falsifying her address to enrol her daughter in a neighbouring school.

A covert surveillance operation was begun on her in 2008, when -- and I am not making this up -- an officer from the local education department followed her for three weeks. He noted her movements in a log. The department obtained her telephone records.

Paton had done nothing wrong. And the local council where Paton lives maintained it had nothing wrong, either. Under the Regulation of Investigatory Powers Act of 2000, local governments have the power to use surveillance to investigate such picayune matters as reports of people not cleaning up after their dogs, or whose dogs bark too loudly, of people who don't recycle or who put out their trash early, of people who operate unlicensed taxicabs. Some 474 local governments and 318 agencies have availed themselves of these powers (including, hilariously, the Charity Commission), and they can, and do, use hidden cameras, examine phone records, track website visits and hire people to go undercover.

According to a New York Times story on Paton's case, which is being heard by a regulatory tribunal, local governments in Britain not only use these surveillance powers regularly, they "self-authorize" such activities outside the scrutiny of the judicial and law enforcement systems. One government report found that some 10,000 "directed surveillance missions" had been undertaken in a single year.

Britain, once the crucible of parliamentary democracy, is now a surveillance state, and is more insidiously Orwellian than Orwell could have ever imagined. It has an estimated 4.2 million closed-circuit TV cameras -- one for every 14 citizens -- and new powers allow police there to access telecom records without judicial authority. In 2007, they did so 500,000 times.

What has this all to do with us?

We are putting on an Olympics. The security budget, as best as non-government sources can estimate, is now in the range of a billion dollars. Included in that will not only be the cost of toys such as an armoured personnel carrier, but a rumoured 900 to 1,100 CCTV cameras for surveillance of Olympic venues and city entertainment areas.

There is nothing wrong with this, despite the ludicrous overkill. Security at events like these is a good thing. And the powers that be have assured the public that the CCTV cameras were temporary in nature and would all be removed once the Olympics had finished.

Well, hmmm. Colour me skeptical. Earlier this year, the City of Vancouver announced it would be retaining 10 of those cameras to be deployed on a mobile basis by police as they saw fit, and that they would be monitored out of a permanent control room at the city's emergency operations centre.

A small matter? Numerically, yes, but cumulatively, no. Small matters add up to big trends. And what big events like the Olympics do is normalize the idea of security as an antidote to our constant state of fear. They are now as much of an Olympic legacy as debt hangover. So we spend a billion dollars to counteract every possible attack, including domestic, foreign or yet to be imagined, and get ever used to the idea that we must let governments do whatever they must -- including trampling on our right to privacy -- to protect us.

Sociologist David Lyons of Queen's University has a good line on this. He said surveillance efforts are no longer being based on "insurable risks" -- where risk was assessed on historical precedent -- but have shifted to "incalculable risks" -- those unimaginable acts of terrorism like 9-11 that government maintains can be countered only by increased security and surveillance.

In that sense, to allude to that hoary Bush-ism, the terrorists have won.

We not only fear the terrorists, but our governments, too.