Mexican Earthquake Coincides With Drill Based Around Exact Same Scenario

Mar 22, 2012 By Henrik Palmgren | redice.tv
Fears amongst some that governments are experimenting with technology that can trigger seismic events have heightened following the bizarre occurrence of yesterday’s Mexican earthquake coinciding with a government drill that was scheduled to take place at precisely the same time simulating an earthquake of the exact same magnitude.

The video above documents how Mexican Civil Protection (CP) authorities had planned to stage a response drill to an earthquake measuring 7.9 on the Richter scale on March 20 at 12 noon local time, which is precisely when an earthquake hit Mexico yesterday.

After having initially been reported as 7.9 on the Richter scale, the earthquake was later revised to measure 7.4.

The exercise was being run under the auspices of Mexico’s State Emergency Committee, the government department tasked with responding to natural disasters.

“As part of preparations for the next megasimulacro March 20, state authorities of Civil Protection (CP) performed exercise tests before a cabinet to simulate the response to a contingency situation, an earthquake measuring 7.9 degrees on the scale Richter,” states a translated report out of Mexican newspaper El Heraldo, which ran the story on March 2.

A poster to publicize this “megasimularco” was also published by authorities, announcing the date of the drill to take place on March 20.

Another Mexican newspaper, La Voz del Norte, also reported on the “megasimularco,” on March 13, noting that three departments of “government are prepared to carry out the Mega Drill to be held on March 20 at about 12 o’clock.”

Yesterday’s earthquake hit precisely at 12:02PM local time in the region of Oaxaca, according to the USGS.

The bizarre coincidence has prompted claims that the event could have been a seismic experiment. 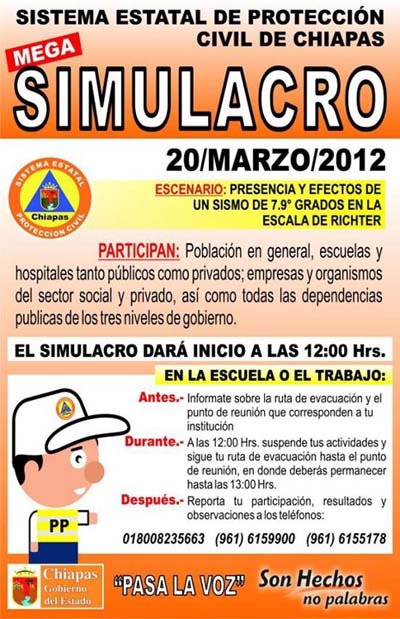 "The 2012 Guerrero–Oaxaca earthquake was a magnitude 7.4 MW (7.93 ML) earthquake that struck southern Mexico at 12:02 local time (18:02 UTC) on Tuesday, 20 March 2012. Its epicenter was near Ometepec, either in the state of Guerrero or Oaxaca, depending on the source. With a shallow focus of 10 to 20 km, the earthquake caused strong shaking over a large area along the Oaxaca–Guerrero border and the adjacent the Pacific coastline. Significant tremors were felt in areas up to several hundred kilometers away, including Mexico City and also in Guatemala.[6]" There were no casualties.
Wikipedia 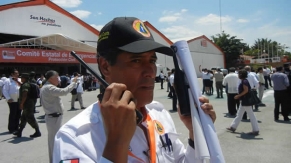 Chiapas had organized a megasimulacro quake at 12:00, three minutes before the actual earthquake.
The movement was also felt in Guatemala. Image: Source