Sep 11, 2012 Source: english.farsnews.com
The weapons and military equipment recently discovered and seized by the Syrian Army in Idlib province proves NATO’s arms and logistic support for terrorists in Syria. 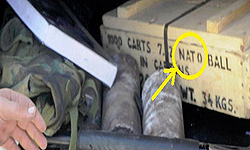 The seized weapons in Salqain district in Idlib included 7.26 guns along with other weapons as well as boxes of gunshots with the words "NATO BALL" carved on them.

The military experts believe that the weapons do not belong to Turkey as the country’s weapons always carry some Turkish words.

Iranian President Mahmoud Ahmadinejad earlier in a meeting with his Tunisian counterpart Muhammad Monsef al-Marzouki in Mecca, Saudi Arabia, had warned of the plots hatched by the enemies and the NATO to dominate the Muslim nations.

"Today the enemies of the regional nations and the NATO forces are ready to dominate all Islamic states," Ahmadinejad said during the meeting on the sidelines of an emergency meeting of the Organization of Islamic Cooperation (OIC) in Mecca mid August.

He said enemies are attempting hard to stir sectarian strife between the Shiite and Sunni Muslims, and underlined that the Iranian nation supports the Tunisian, Egyptian, Yemeni and Palestinian Muslims without considering their religious faith (Shiite or Sunni).

His warnings alluded to the recent conflicts in the region, specially in Syria, where different arrogant powers and their regional allies and proxies are seeking hard to topple the country’s Muslim state. The Arab country has been experiencing unrest since March 2011 with organized attacks by well-armed gangs against Syrian police forces and border guards being reported across the country.

Hundreds of people, including members of the security forces, have been killed, when some protest rallies turned into armed clashes.

The government blames outlaws, saboteurs, and armed terrorist groups for the deaths, stressing that the unrest is being orchestrated from abroad.

Read the full article at: farsnews.com

RIC Editor Note: NATO arming the ’Free Syrian Army’ in the fight against pariah Syrian President al-Assad is a possibility (some would say probability), however an ammunition or weapons crate is not surefire proof of such. NATO, involved in various and multiple conflicts of late, goes through a lot of ammunition. Sometimes NATO countries will sell these boxes surplus, or will leave them in the desert after training exercises in the Middle East. There are many ways NATO boxes could be photographed in hot zones, and in ’inappropriate’ hands. On the other hand, this would not have been the first bit of evidence that NATO countries are engaged in clandestine behaviour that potentially breaks international arms laws, or may be in defiance of UN mandates.

All points should be taken under consideration before reaching a conclusion. We will keep searching for updates on this story.