A man has reportedly been arrested on the island Utøya in connection with a shooting in which several people have been killed. Early Friday evening news emerged of a gunman firing on civilians at a youth camp on the island run by the ruling Labour Party. Earlier in the day a bomb explosion rocked government buildings in Oslo, killing seven people. The greatest damage has been reported from the Norwegian prime minister’s office, though the bomb was apparently planted outside the building. There is no confirmation that the two incidents are connected. Norway’s prime minister Jens Stoltenberg has been unharmed. A live stream from Norwegian TV can be seen here 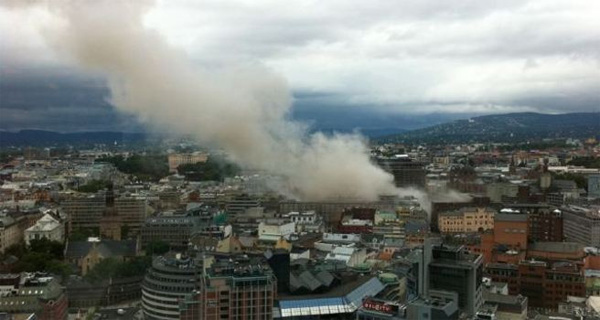 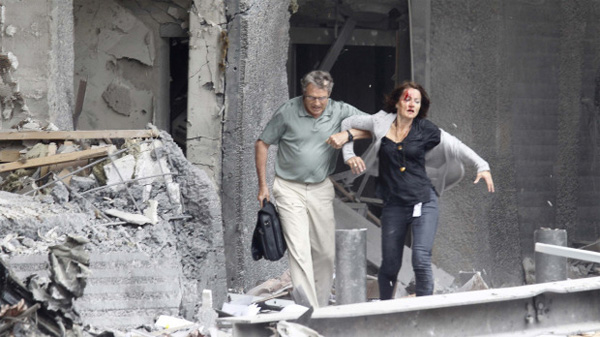 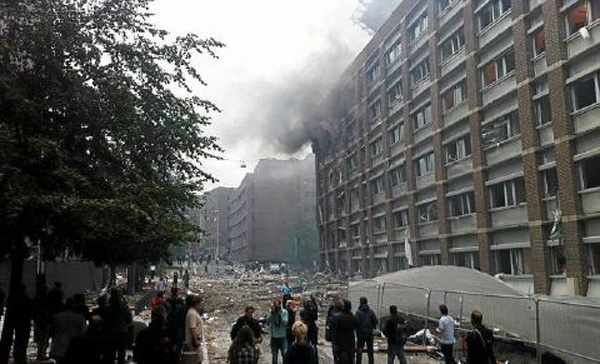 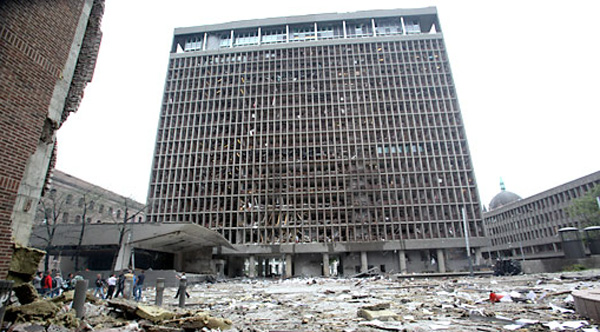 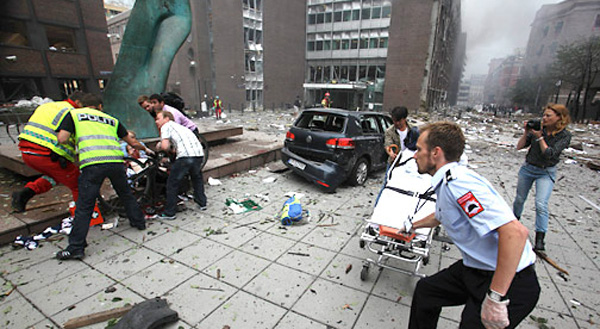 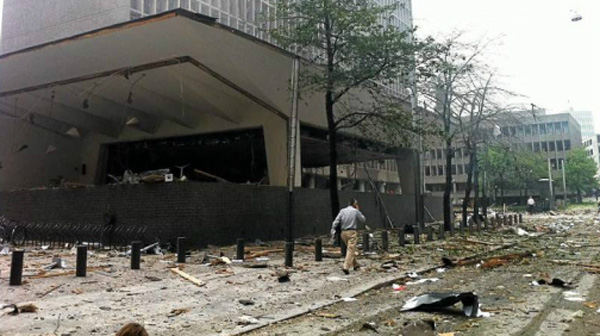 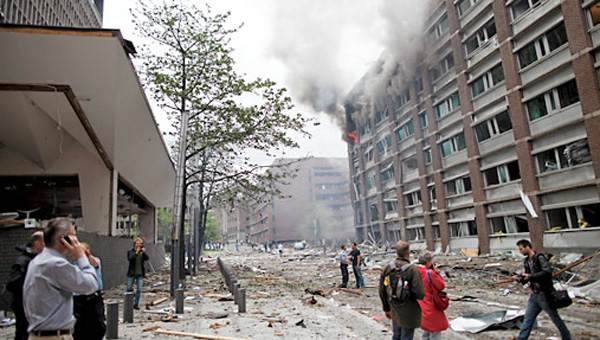 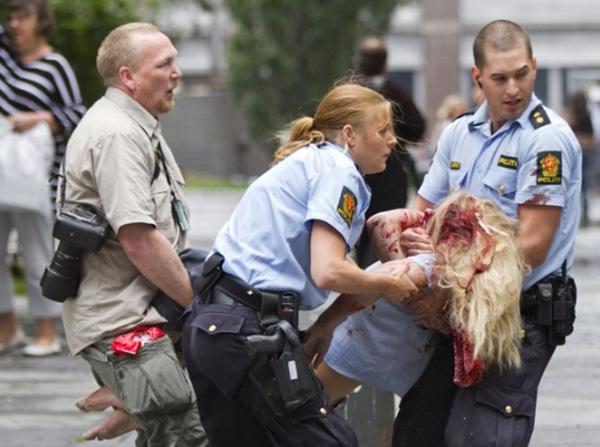 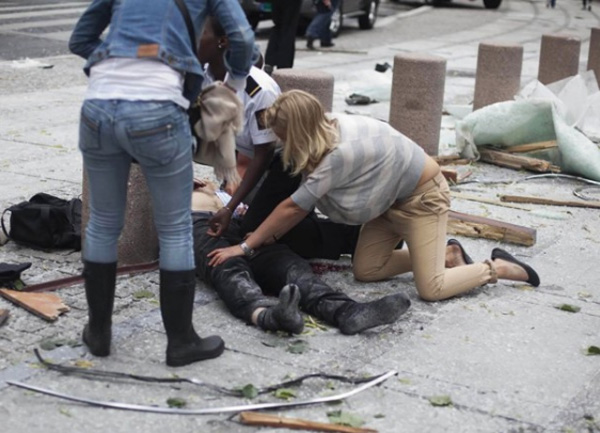 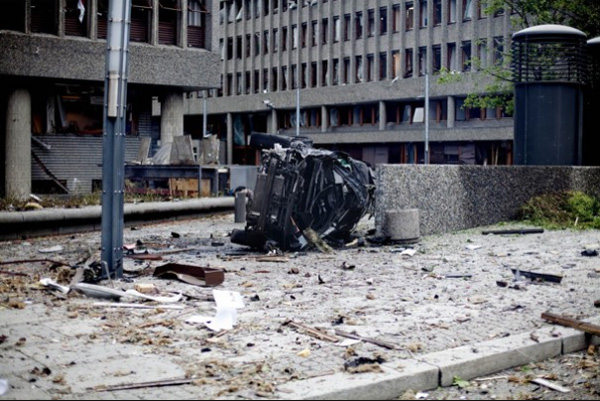 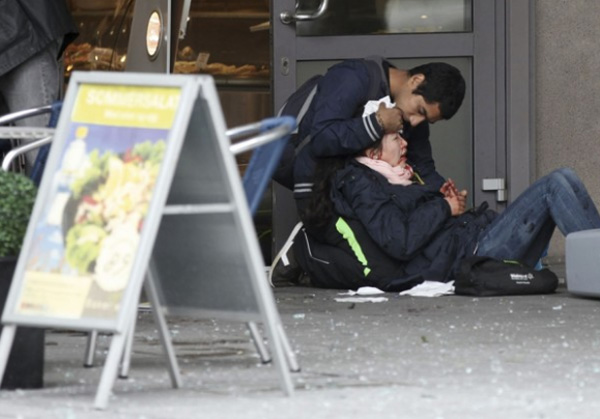 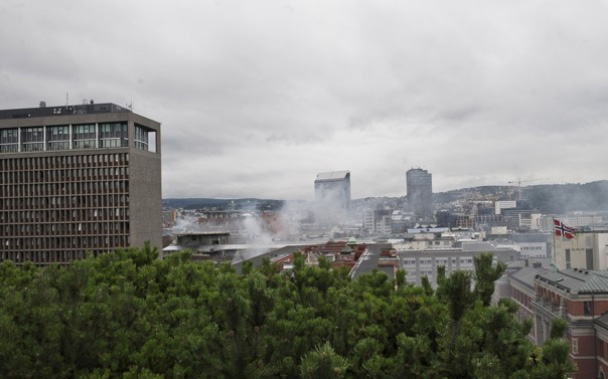 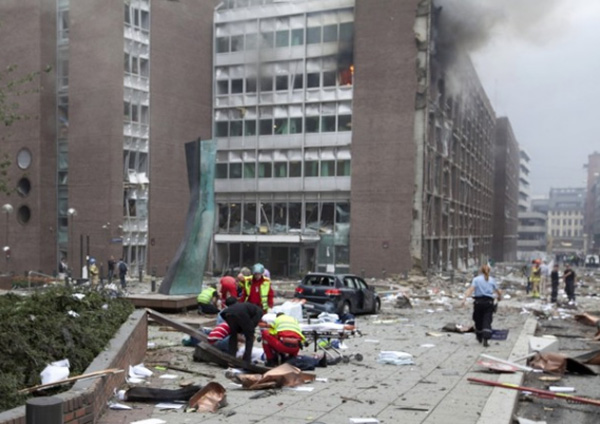 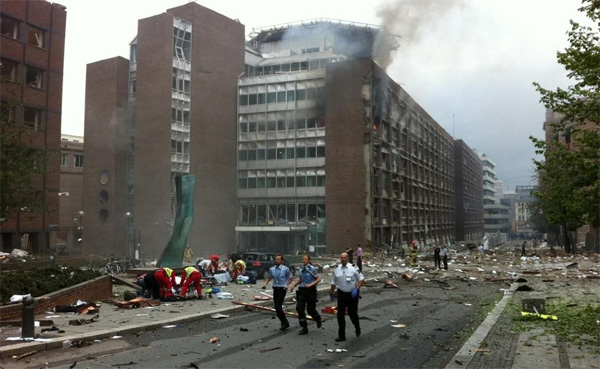 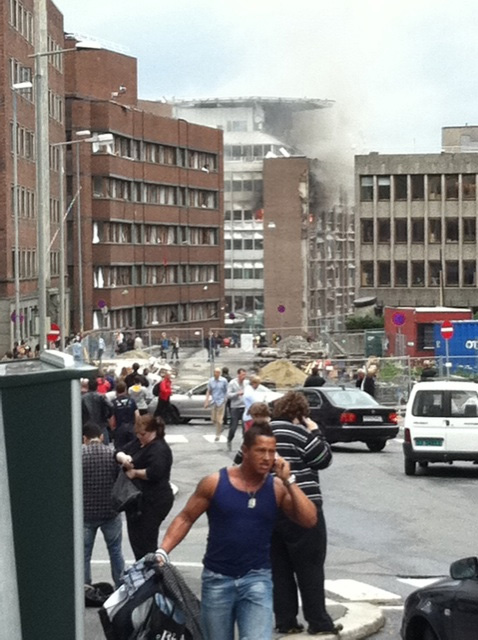 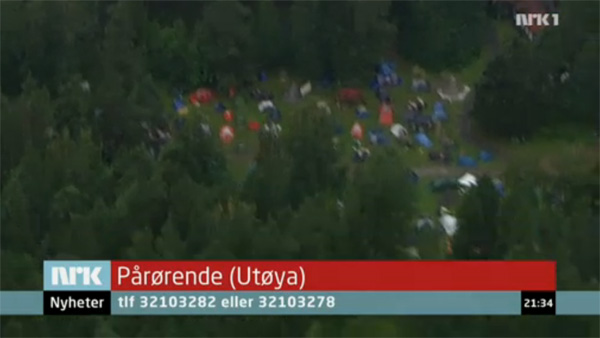 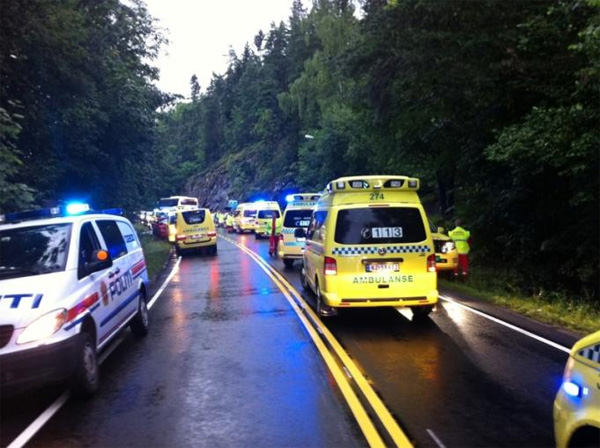 Unconfirmed reports were streaming in Friday evening that as many as 30 young members of the Norwegian Labour Party were gunned down and feared dead, victims of a suspected terrorist dressed as a police officer.

The shootings began at the party’s annual summer camp on an island in the Tyri Fjord, just a few hours after the Norwegian capital was also struck by a massive and deadly explosion.

The drama began after the gunman reportedly arrived on the island known as Utøya in a high-speed rubber raft. He was dressed as a police officer and witnesses said he started gunning down campers, many of them teenagers, who were gathered along the water.

Bodies in the water
Norwegian Broadcasting (NRK) aired video taken from a helicopter of bodies floating in the water, and others desperately trying to swim from the island back to the mainland in an effort to escape the gunman. One man who tried to help rescue campers off the island in a small boat told NRK he saw as many as 25 to 30 dead, but police could not confirm any number of fatalities.

There were more than 600 members of Labour’s youth organization AUF on the island at the time. They were being evacuated Friday night and taken to nearby Sundvollen, where police set up an emergency center for victims and their families. The main E16 highway through the area, which runs between Oslo and Bergen, was closed. A long line of ambulances carried the wounded and dead to nearby hospitals.

The annual summer camp is viewed as a breeding grounds of sorts for future Labour Party leaders, attracting young and often ambitious future politicians. It also attracts current leaders of the party, known as Arbeiderpartiet (Ap) in Norwegian, and Prime Minister Jens Stoltenberg was scheduled to visit the camp on Saturday. Former Prime Minister Gro Harlem Brundtland had been scheduled to visit the camp on Friday, but her status was unclear. Foreign Minister Jonas Gahr Støre was at the camp on Wednesday.

Prime Minister deeply shaken
Stoltenberg, who escaped Friday’s bombing of ministries including his office in downtown Oslo, was clearly shaken by the reports of shootings at this party’s summer camp. He has taken part in the camp himself every summer since the early 1970s.

“It’s supposed to be a place for discussions, play, summer experiences,” he told NRK Friday evening, while being interviewed from a location undisclosed for security purposes.

“This is dramatic, it’s frightening, but we must not allow ourselves to be scared,” Stoltenberg said. “We stand for an open society, and open democracy in Norway, and violence like this can’t scare us.”

He said that Friday’s apparently parallel attacks, both in downtown Oslo and on Utøya, “puts our system to the test,” but he remained confident the country’s emergency response would meet the challenge.

Asked whether he thought the attacks were an attack on Labour, he declined to give a straight answer, saying instead that “it’s very worrisome.” Stoltenberg was meeting in emergency session with his fellow government ministers, many of whom were on Norway’s traditional July summer holidays when the attacks began. Stoltenberg said he also had received many condolences from other heads of state, including a message of support and sympathy from the US.

A massive explosion rocked a government district in Norway’s capital Friday, killing seven people and injuring many more, and a shooter at a political convention on an island north of Oslo appeared to have inflicted more casualties, in incidents police are treating as connected, a police spokesman said.

“Central Oslo looks more like a battlefield,” said Runar Kvernen, a spokesman for the police directorate who was reached by telephone. “The headquarters of the Norwegian government is almost destroyed. It damaged a lot of a of buildings.”

The downtown target appeared to have been the Ministry of Petroleum and Energy, according to a police officer on the scene who spoke to the Dagbladet newspaper.

Smoke could be seen billowing from a high-rise government building on video images of central Oslo, though Kvernen said that the fires were under control. There were several injured people dripping with blood, and documents, broken glass and debris littered the ground. Reporters on the scene said that the area had not been crowded on a Friday afternoon when many people were on vacation.

Kvernen said that police had shut down central Oslo and were urging people to “get home and stay inside. “We are not 100 percent sure what we are dealing with here,” he said.

The Norwegian news agency NTB quoted police as saying that a bomb caused the explosion. Kvernen said he could not confirm that a bomb was the cause.

Prime Minister Jens Stoltenberg, speaking on NRK television, said he was safe and had not been in the area at the time of the explosion. He said no cabinet ministers had been hurt.

Kvernen also described “another very dramatic situation” on an island north of Oslo where a youth political conference of the ruling Labor Party was being held. Shots had been fired on the island, he said, and one gunman arrested.

Kvernen said that police did not believe that more assailants were currently on the island, but that he feared there would be many casualties.

“This is really bad,” he said. “The police have reason to believe that these incidents are connected.”

An eyewitness to the shootings on Utoya Island, about 25 miles from the capital, said in an interview on NRK television that he had seen at least 20 bodies at the camp. A video feed from a helicopter over the island broadcast on the TV2 channel showed dozens of small colorful tents at a campground that appeared to be about the length of a football field.

Norwegian news agency NTB said that former prime minister Gro Harlem Brundtland had been present at the conference and that Stoltenberg was scheduled to speak there tomorrow.

Chatter on online jihadist forums praising the attacks — and in one instance asserting responsibility for them — started almost immediately afterward, terrorism analysts said, but it remained unclear whether those claims had any substance.

A prominent jihadist who goes by the name Abu Suleiman al-Nasser on the Shmukh al-Islam jihadist forum said that the incident was “another message arriving in the countries of Europe from the mujahideen,” according to a translation by the SITE Intelligence Group, a terrorism-monitoring organization. He said that Norway had been targeted because of its involvement in Afghanistan and because a Norwegian newspaper had reprinted controversial Danish cartoons of the prophet Muhammad.

Chatter on online jihadist forums praising the attacks — and in one instance asserting responsibility for them — started almost immediately afterward, terrorism analysts said, but it remained unclear whether those claims had any substance.

A prominent jihadist who goes by the name Abu Suleiman al-Nasser on the Shmukh al-Islam jihadist forum said that the incident was “another message arriving in the countries of Europe from the mujahideen,” according to a translation by the SITE Intelligence Group, a terrorism-monitoring organization. He said that Norway had been targeted because of its involvement in Afghanistan and because a Norwegian newspaper had reprinted controversial Danish cartoons of the prophet Muhammad.

The U.S. ambassador to Norway, Barry White, said in a telephone interview Friday afternoon that investigators in Norway were still assembling information about the attacks and had not reached any conclusions on who was responsible.

“They’re still looking at it,” White said. “Oftentimes the early answers are the wrong ones.”

White said that the United States has offered to assist the Norwegian government. “It’s a tragedy,” he said. “One of the things this demonstrates is there’s no place that is safe from a potential incident of this nature. Norway is considered a fairly safe place, and it is, but this demonstrates that things can happen anywhere.”

In Washington, President Obama expressed his condolences to Norway and offered U.S. support as Norwegian authorities investigate the incidents, which he described as terrorist attacks.

Speaking to reporters after an Oval Office meeting with the visiting prime minister of New Zealand, Obama said the events in Norway serve as a “reminder that the entire international community has a stake in preventing this kind of terror from occurring and that we have to work cooperatively together, both on intelligence and in terms of prevention of these kinds of horrible attacks.”

A spokeswoman for Oslo University Hospital said that 11 injured people had been admitted by Friday evening, some of them in serious condition. It was not immediately clear what kind of bomb had exploded in the capital or where it had been, but NRK television broadcast images of a blackened, damaged vehicle turned on its side near the site of the blast.

Norway has been better known for the Nobel Peace Prize than for any warlike demeanor, and the attack appeared to shock residents and the government establishment of the country. Unlike fortified capitals in other cities, central Oslo is open and unsecured; few barriers prevent cars from approaching government buildings.

The blast appeared likely to change that.

Other Scandinavian countries have been the targets of terrorism, most recently Sweden in December, when two explosions hit Stockholm; in one of the blasts, a suspected terrorist bomber killed himself and injured two other people in a central area of the city. The suspect had made recordings condemning Sweden’s involvement in Afghanistan.

Norway has also contributed significantly to the NATO-led effort to protect civilians in Libya, sending several F-16 jets that had been carrying out 10 percent of the strikes on the country since March, according to the Norwegian Air Force. The aircraft are scheduled to return home at the end of the month.

Norway had also filed charges last week against an Iraqi-born cleric, Mullah Krekar, a founder of the Kurdish militant group Ansar al-Islam, for threatening Norwegian officials with death if he was deported from the country.