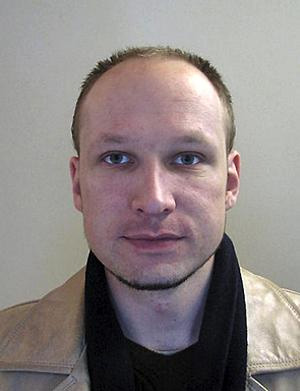 They believe he was in a psychotic state both during and after the twin attacks on 22 July that led to the deaths of 77 people and injured 151.

Their report must still be reviewed by a panel of forensic psychiatrists.

Breivik will still be tried in April but it seems likely he will be placed in psychiatric care rather than prison.

Breivik admits carrying out the attacks but has pleaded not guilty to charges, arguing that that the attacks were atrocious but necessary for his campaign to defend Europe against a Muslim invasion.

The two psychiatrists who interviewed him on 13 occasions concluded that he lived in his "own delusional universe where all his thoughts and acts are guided by his delusions", prosecutors told reporters.

The 243-page report will be reviewed by a panel from the Norwegian Board of Forensic Medicine.

Breivik, 32, is due to stand trial on 16 April for a hearing scheduled to last around 10 weeks.

"If the final conclusion is that Breivik is insane, we will request that the court in the upcoming legal proceedings pass sentence by which Breivik is subjected to compulsory mental health care," prosecutor Inga Bejer Engh told reporters in Oslo.

She later told the BBC that the trial would be unaffected by the diagnosis of paranoid schizophrenia: the only difference was that the prosecution could not ask the judge for a jail sentence.

Breivik’s defence lawyer, Geir Lippestad, said he was not surprised by the psychiatrists’ findings, adding that his client was unlikely to be surprised either.

But the deputy leader of the opposition Progress Party, Per Sandberg, thought the conclusion that Breivik was criminally insane was "completely incomprehensible".

"How can someone who has planned this for such a long time... be considered insane," he told Norwegian TV.

Before the report was made public, a lawyer for the victims said it did not matter what the conclusion was as long as Breivik was not allowed to go free.

"What will happen in the case, no matter what the conclusion, is that he [Breivik] will of course be incarcerated," John Christian Elden said.

"And if the outcome is criminally sane or insane, that is, first and foremost a psychiatric question. The most important thing in our clients’ opinion is that he will not be able to walk the streets."

On 22 July, Breivik disguised himself as a police officer to plant a car bomb that exploded close to government offices in the capital Oslo, killing eight people.

Still in uniform, he then drove to the island of Utoeya, where a summer youth camp of Norway’s governing Labour Party was being held.

In a shooting spree that lasted more than an hour, he killed 69 people - mostly teenagers.

In a manifesto he published online, Breivik said he was fighting to defend Europe from a Muslim invasion, which was being enabled by what he called "cultural Marxists" in Norway’s Labour Party, and the EU.

Norwegians have reacted with surprise and disbelief at the report stating that Breivik is criminally insane.

"I don’t see how Behring Breivik’s opinions set him apart from war criminals, who are tried in court as if they are sane," said one man.

Hours before the announcement, radio news reports were still saying that such a verdict would be highly unlikely.

The shock is heightened by the media portrayal of Breivik as carefully planning his actions as a functioning member of society. He does not match the public’s idea of a paranoid schizophrenic.

Some see the verdict as Norwegian society’s attempt to marginalise and silence extreme right-wing opinions. Clearly this would harm open debate concerning these ideas.

If people do not see Breivik receive what they consider due punishment, it could reduce public faith in the courts and the Norwegian legal system.