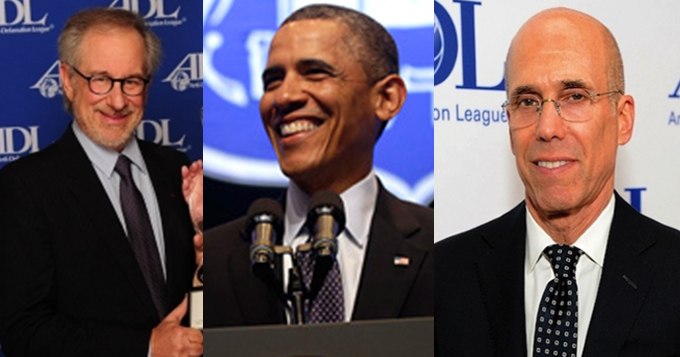 The President of the United States spent much of Thursday talking about the carnage in Charleston at lucrative Hollywood fundraisers for the Democratic Party, but it seems he had dinner with two old friends - or at least the political and Tinseltown equivalent thereof. Late Thursday, Jeffrey Katzenberg and Steven Spielberg were seen leaving the Beverly Hills hotel, where Barack Obama is staying. It seems that soon after leaving the big-dough gathering - top price: $33,400 - at Tyler Perry’s Beverly Hills pad at 7:30 PM, POTUS sat down to break bread with the DreamWorks Animation CEO and the Oscar-winning director.

Like the last time Obama and his top financial contributor dined in private, this meal between the trio was entirely off the official schedule. Katzenberg shared a meal with the president in Obama's Burbank hotel back on August 6, 2013,when the latter was in town for an appearance on The Tonight Show With Jay Leno. It was only the next morning that the White House confirmed the meeting — which probably is what'll happen this time.

Obama is set to go to Highland Park to sit in the garage studio of the WTF With Marc Maron podcast early Friday morning. The president then will head up to San Fran for more fundraisers and a speech at a mayors conference. He’ll be back in the Southland on Saturday for some R&R, aka golf and an overnight stay at an estate near Palm Springs. But don’t worry, political junkies: Hillary Clinton is in L.A. on Friday for a trio of fundraisers of her own — and we know who she’s having dinner with, or at least where. A $2,700-a-ticket evening event at Tobey Maguire and his wife Jennifer Meyer’s home is scheduled for Friday.