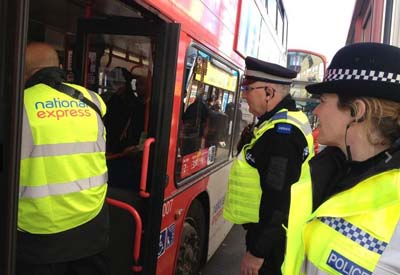 Travel by train, tram or bus to destinations in central England and you are increasingly likely to be greeted by Britain’s ‘yellowjackets’: the high-visibility uniforms of Britain’s police force.

‘Airport-style’ security checkpoints are being rolled out at local bus and train stations up and down the UK after local pilot schemes conducted over the last two years were deemed a success by police.

Over the last couple of years more and more of these ‘security’ checkpoints have been quietly introduced at local bus and train stations across the UK under a number of pretexts that simply don’t bear up to scrutiny.

One such stop-and-search operation last week (May 15th) at West Bromwich bus station in the West Midlands, was captured in this short video clip showing a police officer rifling through a man’s pockets [1] while he holds up his wallet for potential inspection. The other photographs here were tweeted by Sandwell Police on the day.

According to the police this operation and others like it are not related to the ongoing mission creep that police so often attempt to justify with their trump card of ‘terrorism’; instead they represent an increasing shift towards ‘pro-active’ policies which threaten to become a part of everyday policing in Britain today. This Youtube clip shows a ‘Day of Action’ by Sandwell Police, who took to Twitter to explain that,”the aim of this operation is to reduce crime and anti social behaviour and offer community reasurance (sic) and assist in any prosecutions,” [specifically to] “focus on drugs and anti-social behaviour.”