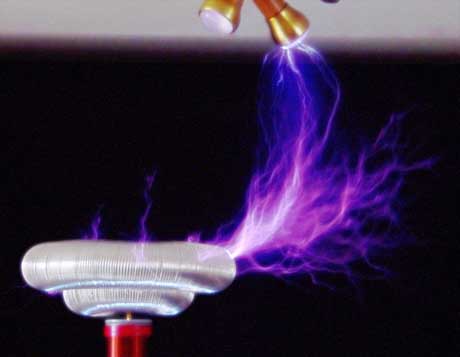 You may one day be able to recharge your laptop or mobile phone without having to plug it into the wall, says a US physicist.

But others say there are many hurdles before such transfer of energy means we can say goodbye to wires.

Assistant Professor Marin Soljacic, of Massachusetts Institute of Technology, will present his team's work at the American Institute of Physics forum in San Francisco this week.

But recharging devices like laptops requires a much higher level of energy. And if this was routinely zapped through the air it could 'fry' any living organisms that get in the way.

But Prof Soljacic says he has found a way of transmitting energy so that only the devices that it is recharging will pick it up, so it will not affect humans.

Instead of using traditional radiation, he wants to use the part of the electromagnetic field that is 'non-radiative'.

He says devices can be tuned to the frequency of this field and thus act as a sink for all the energy the transmitter gives out.

Prof Soljacic says this would prevent energy radiating out to areas it does not need to go to, providing an efficient and safe method of wireless energy transfer.

"The team calculates that an object the size of a laptop could be recharged within a few metres of the power source," he says. "Placing one source in each room could provide coverage throughout your home."

Prof Soljacic also thinks the technology could be used to power freely roaming robots in a factory.

Finding a 'magic' frequency
But Australian physicists, yet to see the full details of Prof Soljacic's work, are sceptical of his claims.

They say the challenge is finding a 'magic' frequency that does not also affect living organisms and thus pose possible health risks.

"You would be reintroducing all the problems that we went through with mobile phones," says Dr Geoff Anstis of the University of Technology, Sydney, referring to the uncertainty surrounding any long-term health effects of using mobiles.

"And it wouldn't be until a couple of decades that you may be happy that there isn't a significant problem."

His colleague Professor Geoff Smith agrees and says there are also technical challenges to keeping the devices tuned with the transmitters, thus preventing the general release of stray energy.

"I think this is nice physics but there's a way to go before it would be possible," says Prof Smith.

He says any changes in the surrounding environment could "de-tune" the system and stop the safe and efficient transfer of power.

He agrees that safety and technical barriers to wireless power systems are huge and would like further details on Prof Soljacic's proposal.

Dr Bird also says that, depending on the frequency of the field, the antenna on the device being recharged may have to be very large.