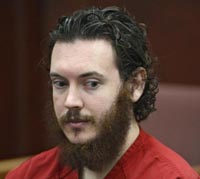 The defendant in the Colorado movie theater shooting had the day of the attack marked "with a unique symbol" on a calendar, a Batman mask and a violent drawing in his apartment, according to testimony Wednesday.

The discoveries were revealed during a pretrial hearing on whether evidence seized from the apartment after the shooting can be introduced at James Holmes’ trial.

There was no testimony regarding the significance of the items. "The Dark Knight Rises," the most recent Batman movie, was showing as 12 people were killed and 70 others were wounded in the July 2012 massacre.

Holmes’ attorneys have acknowledged their client was the gunman, but he has pleaded not guilty by reason of insanity to murder and related charges.

Prosecutors are seeking the death penalty and will have to prove he was sane during the attack.

Most of the evidence being contested during the hearings this month could be used by prosecutors in an attempt to undermine Holmes’ insanity plea.

FBI agent Leslie Kopper testified that a bureau-led evidence team found the mask and a calendar with July 20, 2012, marked "with a unique symbol," which she didn’t describe.

Kopper didn’t elaborate on the discoveries, and neither prosecutors nor defense lawyers asked further questions about them.

Aurora police Detective Thomas Wilson testified that he found the violent drawing in a spiral notebook inside a backpack, saying it was "some kind of maze game involving a serial killer."

Attorneys did not ask him follow-up questions.