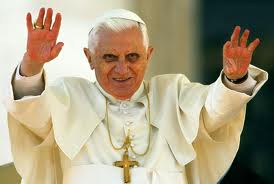 Pope Benedict XVI has made a sweeping exoneration of the Jewish people for the death of Jesus Christ, tackling one of the most controversial issues in Christianity in a new book.

In "Jesus of Nazareth-Part II" excerpts released Wednesday, Benedict explains biblically and theologically why there is no basis in Scripture for the argument that the Jewish people as a whole were responsible for Jesus’ death.

Interpretations to the contrary have been used for centuries to justify the persecution of Jews.

While the Catholic Church has for five decades taught that Jews weren’t collectively responsible, Jewish scholars said Wednesday the argument laid out by the German-born pontiff, who has had his share of mishaps with Jews, was a landmark statement from a pope that would help fight anti-Semitism today.

"Holocaust survivors know only too well how the centuries-long charge of ’Christ killer’ against the Jews created a poisonous climate of hate that was the foundation of anti-Semitic persecution whose ultimate expression was realized in the Holocaust," said Elan Steinberg of the American Gathering of Holocaust Survivors and their Descendants.

The pope’s book, he said, not only confirms church teaching refuting the deicide charge "but seals it for a new generation of Catholics."

The Catholic Church issued its most authoritative teaching on the issue in its 1965 Second Vatican Council document "Nostra Aetate," which revolutionized the church’s relations with Jews by saying Christ’s death could not be attributed to Jews as a whole at the time or today.

Benedict comes to the same conclusion, but he explains how with a thorough, Gospel-by-Gospel analysis that leaves little doubt that he deeply and personally believes it to be the case: That only a few Temple leaders and a small group of supporters were primarily responsible for Christ’s crucifixion.

That Benedict is a theologian makes "this statement from the Holy See that much more significant for now and for future generations," said Anti-Defamation League national director, Abraham H. Foxman.

Foxman in a statement hailed Benedict for rejecting "the previous teachings and perversions that have helped to foster and reinforce anti-Semitism through the centuries."

The book is the second installment to Benedict’s 2007 "Jesus of Nazareth," his first book as pope, which offered a very personal meditation on the early years of Christ’s life and teachings. This second book, set to be released March 10, concerns the final part of Christ’s life, his death and resurrection.

The Vatican’s publishers provided a few excerpts Wednesday.
In the book, Benedict re-enacts Jesus’ final hours, including his death sentence for blasphemy, then analyzes each Gospel account to explain why Jews as a whole cannot be blamed for it. Rather, Benedict concludes, it was the "Temple aristocracy" and a few supporters of the figure Barabbas who were responsible.

"How could the whole people have been present at this moment to clamour for Jesus’ death?" Benedict asks.

He deconstructs one particular biblical account which has the crowd saying, "His blood be on us and on our children" — a phrase frequently cited as evidence of the collective guilt Jews bore and the curse that they carried as a result.

The phrase, from the Gospel of Matthew, has been so incendiary that director Mel Gibson was reportedly forced to drop it from the subtitles of his 2004 film "The Passion of the Christ," although it remained in the spoken Aramaic.

But Benedict said Jesus’ death wasn’t about punishment, but rather salvation. Jesus’ blood, he said, "does not cry out for vengeance and punishment, it brings reconciliation. It is not poured out against anyone, it is poured out for many, for all."

Benedict, who was forced to join the Hitler Youth as a child in Nazi Germany, has made improving relations with Jews a priority of his pontificate. He has visited the Auschwitz Nazi death camp in Poland and Israel’s Yad Vashem Holocaust memorial.

But he also has had a few missteps that have drawn the ire of Jewish groups, most notably when in 2009 he lifted the excommunication of a traditionalist Catholic bishop who had denied the extent of the Holocaust by saying no Jews were gassed during World War II.

Benedict has said that had he known Bishop Richard Williamson’s views about Jews he never would have lifted the excommunication, which was imposed in 1988 because Williamson was consecrated without papal consent. Williamson is a member of the traditionalist Society of St. Pius X, which has rejected many Vatican II teachings, including the outreach to Jews contained in Nostra Aetate.

Separately, Jewish groups have been outraged that Benedict is moving Pope Pius XII closer to beatification, the first main hurdle to possible sainthood. Some Jews and historians have argued the World War II-era pope should have done more to prevent the Holocaust.

The Rev. James Martin, a Jesuit who writes frequently about spirituality, said the pope’s new book was a "ringing reaffirmation" of Nostra Aetate, which was passed during the Second Vatican Council, with the pope putting his "personal stamp on it in a way that’s irrefutable."

"A Vatican Council is the highest teaching authority of the church," Martin said. "Now that you have the pope’s reflections underlining it, I don’t know how much more authoritative you can get."

Rabbi David Rosen, head of interreligious affairs at the American Jewish Committee and a leader of Vatican-Jewish dialogue, said the pope’s book may make a bigger, more lasting mark than Nostra Aetate because the faithful tend to read Scripture and commentary more than church documents, particularly old church documents.

"It may be an obvious thing for Jews to present texts with commentaries, but normally with church magisterium, they present a document," he said. "This is a pedagogical tool that he’s providing, so people will be able to interpret the text in keeping with orthodox Vatican teaching."

Foxman put it another way, saying the pontiff’s book translates Nostra Aetate "down to the pews."

Craig Hines - Gateway of the Gods

Gene Matlock - The Origins of Humanity, Civilization & The Nephilim

John Lash - The Discovery of the Eadwine Psalter