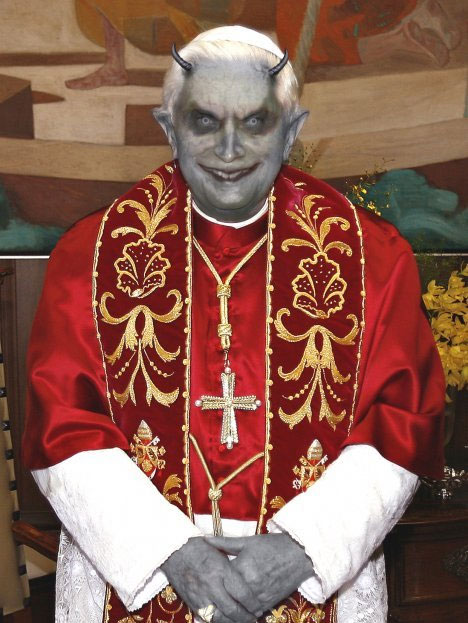 Convenient that the pope helped get housing for a clergyman suspected of child sex abuse then.

The Devil In The Vatican

Since the Catholic sexual abuse crisis erupted a decade ago, there have been numerous attempts to explain its causes, from a lack of fidelity to an over-emphasis on celibacy and clerical privilege. This morning in Rome, Pope Benedict XVI pointed to a deeper unseen force lurking behind the crisis, especially its timing: the Devil.

It’s no accident, the pope implied, that precisely as the Catholic church was celebrating a “Year for Priests” in 2009-2010, the sexual abuse crisis once again took on massive global proportions.

“It was to be expected that this new radiance of the priesthood would not be pleasing to the ‘enemy,’” Benedict XVI said. “He would have rather preferred to see it disappear, so that God would ultimately be driven out of the world.”

The term "the enemy" is a traditional Catholic way of referring to the Devil.
The line drew applause from the crowd gathered in St. Peter’s Square for a Mass bringing the "Year for Priests" to a close. The Vatican said that some 15,000 priests from more than 90 countries were on hand for the event.
Benedict said that the sexual abuse of minors amounts to a direct contradiction of the meaning of the Catholic priesthood.

“So it happened in this very year of joy for the sacrament of the priesthood, the sins of priests came to light – particularly the abuse of the little ones, in which the priesthood, whose task is to manifest God’s concern for our good, turns into its very opposite,” the pope said.
Those comments came as part of Benedict’s homily for the closing Mass of the “Year for Priests," which also marked the feast of the Sacred Heart of Jesus. Benedict XVI did not allude to recent criticism of his own role, or that of the Vatican, in responding to the crisis.

In the run-up to this morning's Mass, some had speculated that Benedict might use the occasion to unveil dramatic new policy measures on the sexual abuse crisis. In fact, the pope did not announce any new initiatives, but instead referred to the crisis in a more spiritual key as a “summons to purification.”

As he has on numerous occasions in the past, the pope apologized both to God and to the victims of abuse, and pledged to prevent such abuse in the future.

“We insistently beg forgiveness from God and from the persons involved, while promising to do everything possible to ensure that such abuse will never occur again,” the pope said.

“In admitting men to priestly ministry and in their formation, we will do everything we can to weigh the authenticity of their vocation and make every effort to accompany priests along their journey, so that the Lord will protect them and watch over them in troubled situations and amid life’s dangers,” he said.

Had the “Year for Priests” been merely a celebration of the human performance of priests, Benedict said, it would have been ruined by the revelations of the sexual abuse crisis. Instead, he said, the crisis should make the church embrace its faith in God with new “courage and humility.”

Later, Benedict XVI invoked the image of the shepherd’s rod, saying that using the rod to correct those who go astray can be a “service of love.”
The use of the rod, the pope said, clearly applies to taking a firmer hand on the sexual abuse crisis.

“Today we can see that it has nothing to do with love when conduct unworthy of the priestly life is tolerated,” he said.

On other matters, Benedict XVI rejected a “functionalist” understanding of the priesthood, treating it as comparable to other jobs or professional roles. Instead, the pope insisted, the priesthood is not an office but a sacrament.
Ultimately, he said, the priesthood expresses the “audacity of God,” who considers flawed men capable of “acting and being present in his stead.”

The pope argued that a priest must make present a God who is actively involved in the affairs of the world and in individual human lives, as opposed to the unknown deities of the ancient world or the “watchmaker” God of the Enlightenment, who creates the world and then withdraws from it.

God actively looks after the world, the pope insisted, including laying down clear moral laws – not to control human beings, but to see them flourish.

“Wherever God’s loving concern is perceived as getting in the way, human beings go awry,” he said.

“We understand that these rules from God are not chains, but the way which he is pointing out to us,” the pope said. “As priests, we need to communicate to others our own joy at the fact that we have been shown the right way.”

In addition to being firm on sexual abuse, the pope also called for greater vigilance about deviations from the faith.

It has nothing to do with love, Benedict XVI said, “if heresy is allowed to spread and the faith twisted and chipped away, as if it were something that we ourselves had invented.”

That remark likewise drew applause, the only other time the crowd this morning interrupted the pope's homily to affirm a particular line.
As a footnote, Italian Cardinal Angelo Sodano, the former Secretary of State under Pope John Paul II and still the dean of the College of Cardinals, was a principal concelebrant of this morning's Mass. It was Sodano's first major appearance alongside the pope since his remarks at the Easter Sunday liturgy, comparing criticism of Benedict XVI on the sexual abuse crisis to "petty gossip," drew wide international criticism.