Aug 29, 2013 Source: medicalxpress.com
Red Ice Creations: Whoa.... that’s a 10 on the creepy scale!! This is as amazing a demonstration of new technology as it is unnerving.
Is this a step towards fleshy ’avatars’, or advanced thought-controlled prosthetics, or just a path towards the ultimate mind/body control mechanism?
Where won’t humans go with this - where do we draw the line?

University of Washington researchers have performed what they believe is the first noninvasive human-to-human brain interface, with one researcher able to send a brain signal via the Internet to control the hand motions of a fellow researcher.

Using electrical brain recordings and a form of magnetic stimulation, Rajesh Rao sent a brain signal to Andrea Stocco on the other side of the UW campus, causing Stocco’s finger to move on a keyboard. 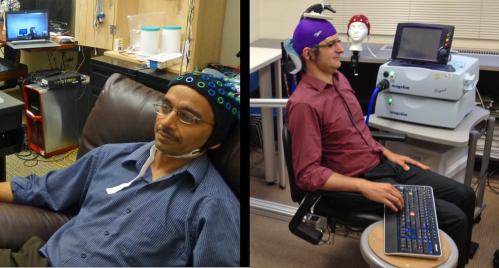 University of Washington researcher Rajesh Rao, left, plays a computer game with his mind. Across campus, researcher Andrea Stocco, right, wears a magnetic stimulation coil over the left motor cortex region of his brain.
"The Internet was a way to connect computers, and now it can be a way to connect brains," Stocco said. "We want to take the knowledge of a brain and transmit it directly from brain to brain."

The researchers captured the full demonstration on video recorded in both labs. The version available at the end of this release has been edited for length.

Rao, a UW professor of computer science and engineering, has been working on brain-computer interfacing (BCI) in his lab for more than 10 years and just published a textbook on the subject. In 2011, spurred by the rapid advances in BCI technology, he believed he could demonstrate the concept of human brain-to-brain interfacing. So he partnered with Stocco, a UW research assistant professor in psychology at the UW’s Institute for Learning & Brain Sciences.

On Aug. 12, Rao sat in his lab wearing a cap with electrodes hooked up to an electroencephalography machine, which reads electrical activity in the brain. Stocco was in his lab across campus wearing a purple swim cap marked with the stimulation site for the transcranial magnetic stimulation coil that was placed directly over his left motor cortex, which controls hand movement.

The team had a Skype connection set up so the two labs could coordinate, though neither Rao nor Stocco could see the Skype screens.

Rao looked at a computer screen and played a simple video game with his mind. When he was supposed to fire a cannon at a target, he imagined moving his right hand (being careful not to actually move his hand), causing a cursor to hit the "fire" button. Almost instantaneously, Stocco, who wore noise-canceling earbuds and wasn’t looking at a computer screen, involuntarily moved his right index finger to push the space bar on the keyboard in front of him, as if firing the cannon. Stocco compared the feeling of his hand moving involuntarily to that of a nervous tic.

"It was both exciting and eerie to watch an imagined action from my brain get translated into actual action by another brain," Rao said. "This was basically a one-way flow of information from my brain to his. The next step is having a more equitable two-way conversation directly between the two brains."

Read the full article at: medicalxpress.com