Is the world only a Pope away from the End? Yes, if you believe a chilling 12th-century prophecy.

Attributed to St. Malachy, an Irish archbishop canonized in 1190, the Prophecy of the Popes would date to 1139. The document predicted that there would be only 112 more popes before the Last Judgment — and Benedict XVI is 111.

The list of popes originated from a vision Malachy said he received from God when he was in Rome, reporting on his diocese to Pope Innocent II.

The story goes that St. Malachy gave the apocalyptic list to Innocent II and that the document remained unknown in the Vatican Archives some 440 years after Malachy’s death in 1148. It was rediscovered and published by Benedictine Arnold de Wyon in 1590.

The prophecy consists of brief, cryptic phrases in Latin about each Pope. It ends with the 112th pope, named “Petrus Romanus” or “Peter the Roman.”

According to the premonition, Peter the Roman would “feed his flock amid many tribulations, after which the City of the Seven Hills shall be utterly destroyed, and the awful Judge will judge the people.”

For example, Malachy prophesied the first pope on his list would be “from a castle on the Tiber.” Celestine II, elected in 1143, was born in Toscany on the shores of the Tiber River.

Malachy predicted another pope would be “elevated from a hermit.” Nicholas IV, pope from 1288 to 1292, had been a hermit in the monastery of Pouilles.

The 45th pope in the prophecy is described as coming “from the hell of Pregnani”. Indeed, Pope Urban VI (1378-1389) was born Domenico Prignano and came from a village near Naples called Inferno (hell).

Most scholars consider the document a 16th-century elaborate hoax. Until 1590, when the prophecy was published, the mottoes were easily derived from the pope’s family, baptismal names, native places or coats of arms.

After 1590 the epithets become much more vague. According to the Catholic Pages, “the inclusion of anti-popes would also appear to militate against the authenticity of the prophecies.”

Yet, uncanny similarities also appear when reading the mottoes associated to modern-day popes.

For example, the 109th pope is described as “of the half of the moon.” John Paul I, elected pope in 1978, “lasted about a month, from half a moon to the next half,” the Catholic Pages noted.

As for his successor, the late Pope John Paul II, Malachy described him in Latin as “de labore solis,” meaning “of the eclipse of the sun, or from the labor of the sun.”

Finally, “Glory of the Olives” is the motto for Benedict XVI, the 111th pope in the list. A branch of the monastic order founded by St. Benedict is called the Olivetans.

As for the doomsday pope, one would think we are quite safe: according to church tradition, no pope can take the name Peter II.

However, one of the favorites to succeed Benedict XVI is Ghanaian Cardinal Turkson. His first name is Peter. 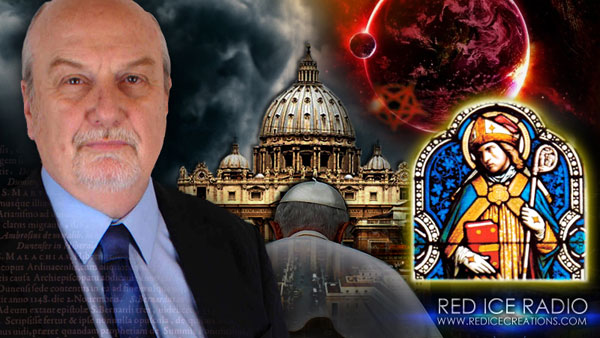 Thomas Horn is an internationally recognized lecturer, radio host and bestselling author of several books including his newest books, Petrus Romanus: The Final Pope Is Here. He is a well-known columnist who has been interviewed by US Congressmen and Senators on his findings as well as featured repeatedly in major media. Thomas received the highest degree honorary doctorate bestowed in 2007 from legendary professor Dr. I.D.E. Thomas for his research into ancient history. He returns to Red Ice to discuss Petrus Romanus.

For more than 800 years scholars have pointed to the dark augury having to do with "the last Pope." The prophecy, taken from St. Malachy’s "Prophecy of the Popes," is among a list of verses predicting each of the Roman Catholic popes from Pope Celestine II to the final pope, "Peter the Roman," whose reign would end in the destruction of Rome. St. Malachy’s list heralds the beginning of "great apostasy" followed by "great tribulation" sets the stage for the imminent unfolding of apocalyptic events. According to this prophecy, the next Pope will be a false prophet who leads the world’s religious communities into embracing a political leader known as Antichrist.

In the second hour, Tom speaks about Vatican luciferians and what role they play in the prophecy of the popes. He talks about the secret of Malachi Martin and the enthronement of Lucifer at the Vatican. We also discuss Albert Pike and satanic ritual. Tom says nothing in all his years comes close to the importance of what he is talking about today. Something strange and troubling is going on. Later, we talk about the next pope, Peter the Roman who fulfills the prophecy and Nostradamus’ prediction of a young black pope.

Danny Wilten - Orion In The Vatican