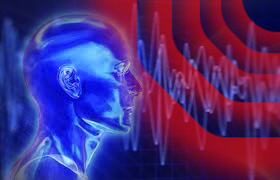 Scientists have discovered that ultrasound directed to a specific areas of the brain can enhance sensory awareness and perception in the brain.

Most people are familiar with the use of ultrasound scanners as devices that utilise high frequency sound waves to create images of internal organs. This technology has now been adapted by researchers at Virginia Tech Carilion Research Institute to affect brain performance.

"Ultrasound has great potential for bringing unprecedented resolution to the growing trend of mapping the human brain’s connectivity," said William "Jamie" Tyler, an assistant professor at the Virginia Tech Carilion Research Institute, who led the study. "So we decided to look at the effects of ultrasound on the region of the brain responsible for processing tactile sensory inputs."

The word "ultrasound", in physics, describes sound waves at a frequency humans outside the range of human hearing. In diagnostic sonography, the ultrasound is usually between 2 and 18 MHz. Higher frequencies yield better quality images, but lower frequencies can penetrate deeper into human tissue.The study, which was published online Jan. 12 in Nature Neuroscience, provided the first evidence that low-intensity, transcranial-focused ultrasound could modulate human brain activity to enhance perception.

During the study, scientists focused ultrasound waves on the area of the cerebral cortex that processes sensory information from the hand. The median nerve, the major nerve passing down the arm and through the carpal was also stimulated by the placement of a small electrode on the wrist of human subjects, and then their brain responses were monitored using electroencephalography, or EEG. Just prior to stimulation of the median nerve, ultrasound was delivered to the cerebral cortex region in some subjects. Two standard neurological tests were then carried out: the two-point discrimination test, which determines whether a test subject can distinguish between two separate pins touching their skin, and the frequency discrimination task that measures responses to a sequence of air puffs, and the results were quite surprising.

Those subjects who had received ultrasound were able to distinguish pins at much closer distances and also sense much more subtle distinctions between the frequency of successive air puffs.

"Our observations surprised us," said Tyler. "Even though the brain waves associated with the tactile stimulation had weakened, people actually got better at detecting differences in sensations."

These findings, whilst of great value to the medical profession, illustrate just how vulnerable our brains are from subtle external interventions. One wonders how such technology could be developed and adapted for more nefarious means, creating the potential for others to remotely control our decisions and responses.

"In neuroscience, it’s easy to disrupt things," said Tyler. "We can distract you, make you feel numb, trick you with optical illusions. It’s easy to make things worse, but it’s hard to make them better. These findings make us believe we’re on the right path."