May 17, 2012 Source: bbc.co.uk
The Ministry of Defence has confirmed a sonic device will be deployed in London during the Olympics. 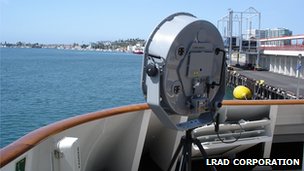 The American-made Long Range Acoustic Device (LRAD) can be used to send verbal warnings over a long distance or emit a beam of pain-inducing tones.

The equipment was spotted fixed to a landing craft on the Thames at Westminster this week.

The manufacturer denies it is a weapon and the MoD said it would be used "primarily in the loud hailer mode".

A spokesman for the San Diego-based LRAD Corporation said the 1000Xi was "an effective long range communications system that broadcasts focused, highly intelligible, multi-language messages, instructions and warnings over distances up to 3,000 metres to peacefully resolve uncertain situations".

The piercing beam of sound emitted by the device is highly directional. Some versions of the LRAD are capable of producing deafening sound levels of 150 decibels at one metre.

But the device, which was used this week during Exercise Olympic Guardian, can also be used to broadcast verbal warnings, such as ordering crowds to disperse.

LRAD Corporation has previously sold the device to the US Army, which deployed them in Iraq for crowd control.

They have also been bought by the US Navy and Air Force as well as a number of police forces worldwide.

It has been successfully used aboard ships to repel Somali pirates.

The panel-shaped LRAD is mounted onto steerable gimbals and said to be far more efficient than a normal loudspeaker.

A Ministry of Defence spokesman said: "As part of the military contribution to the police-led security effort to ensure a safe and secure games, a broad range of assets and equipment is being used by our armed forces".

"This includes the LRAD (Long Range Acoustic Device) which will be deployed during the Olympic Games primarily to be used in the loud hailer mode as part of the measures to achieve a maritime stop on the Thames."

The LRAD spokesman said: "LRAD systems are far superior to bullhorns, which have limited range and poor sound quality.

"LRAD systems enable homeland security and law enforcement personnel to communicate safely and clearly to individuals on land or water and assist in keeping high profile events safe for all participants."