Sun "Fireworks" Responsible for the Mass Killing of Birds? 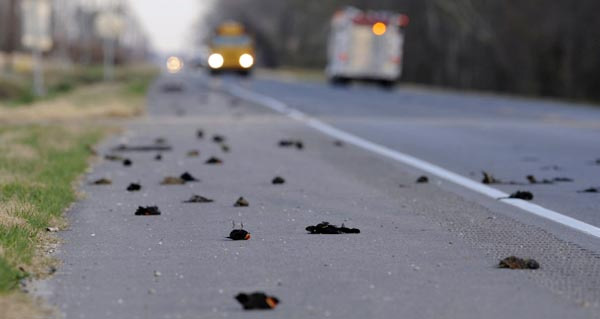 Since the highly published occurrence of 3,000 to 5,000 blackbirds falling to their death on January 1st 2011, more bird and fish mass suicides have occurred. Just yesterday, a new report telling of millions of dead fish surfaced in Maryland's Chesapeake Bay.

On Tuesday, similar unexplained mass fish deaths occurred across the world in Brazil and New Zealand. On Wednesday, 50 birds were found dead on a street in Sweden.

The latest mass suicide is found in England where more than 40,000 Velvet swimming crabs have wound up dead on England beaches. The Thanet shoreline is littered with the crabs, along with dead starfish, lobsters, sponges and anemones.

So far the list of mass suicide events have taken place in Arkansas, Texas, Louisiana, Kentucky, Maryland - then onto to Sweden, England, Brazil, and New Zealand.

You might have noticed I used the words "mass suicide". I used this term to reflect the official explanations for most of these events. The Texas massacre was said to be "birds flying into cars". The Louisiana deaths were caused by "hitting power lines or cars". The Sweden incident "was caused by difficulty finding food". And of course the Arkansas suicidal occurrence was caused by "fireworks and they flew into homes and cars".

The above explanations is not conjecture or satire, it is factual "official statements" presented by area authorities such as the Parks and Wildlife Department.

The Kentucky event and their official explanation I believe to be the most promising. Mark Marraccini of the Kentucky Department of Fish and Wildlife said: "The deaths could have been caused by weather or another natural event."

I would suggest there could only be two reasonable answers to the recent string of bird and fish deaths. 1) Man-made. This is to say some sort of new military weaponry which emits a form of geo-magnetic pulse. If so, the next question would be ... was it intentional or unintentional? Either way, this is one scary scenario. Either they don't know what the hell they're doing -or- they don't have our best interest in mind. Of the two, I would hope for "idiots-at-work."

The second two answer is no less frightening. 2) The deaths were caused by a "natural occurrence". This is to say it was caused by a geo-magnetic flux from the Sun, and its possible chain-reaction with the Earth's core.

A recent occurrence could be the explanation to this unusual and sudden chain of events. On December 31st 2010, a vast coronal hole opened up in the Sun's atmosphere. When this occurs, the solar magnetic field opens up and allows solar wind (charged particles) to escape. The initial hit from this pulse could hit Earth within 8 minutes to 24 hours. The following stream of charged particles flowing from this coronal hole reached Earth late January 2nd 2011. 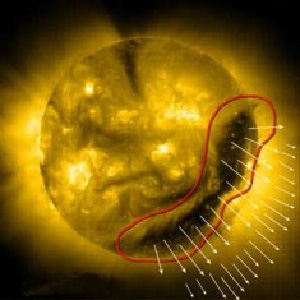 This scenario fits perfectly with the string of occurrences beginning on January 1st with the death of some 5,000 birds in Arkansas. Migrant birds follow "magnetic lay-lines" which directs them during seasonal change. Marine mammals such as whales and dolphins also are directed by magnetics.

Regarding fish, I would suggest it could be more related to current temperatures streams. As related to the Earth's core, perhaps upper crust mantle heated and cooled in rapid succession - leading the fish from warm water to cold.

In addition to the release of charged particles from the Sun, the recent partial solar eclipse on January 4th could have played a role.

A personal question which immediately comes to my mind --- is this related to the on-going sequence of events as prophesized in ancient text? If the events we see are proved to be a "natural occurrence" as described by Mark Marraccini of the Kentucky Department of Fish and Wildlife, then perhaps what we are witness to is an expanded cyclical encounter. If so, then one must take into consideration what the Maya, Hopi, Christian, Sumarian, Dogon, Aztec, Egyptian, Tibetan, Celtic, Druid ancestors have been trying to tell us. - Change is coming, and it is in our time.