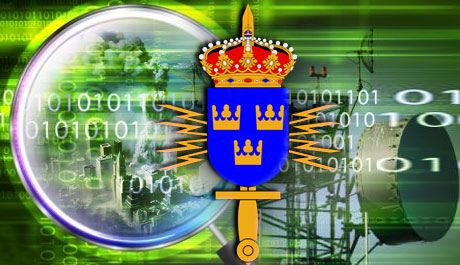 As Sweden's parliament prepares to pass a controversial new surveillance law, Faisal Enayat Khan takes a closer look at the development of a far-reaching tapping scheme.

When planning the 9/11 attacks, the twenty al-Qaeda members involved referred to the plot as “The Big Wedding” and to the hijackers as the “brothers” attending the wedding.

Seven years on from the attacks that killed over 3,000 people in New York and Washington, the Swedish government is ready to present a new surveillance bill to parliament for debate on June 17th that it hopes will help prevent a similar tragedy from happening in Sweden.

A vote on the measure is planned for June 18th.

The legislation will also require all telecom operators in Sweden to bring their systems into line with FRA’s surveillance system.

But is FRA likely to catch any actual terrorists or international criminals in this vast net?

Waheed Mujdeh, a senior Taliban-era official from the Afghan foreign ministry and a long-time acquaintance of Osama bin Laden, tells The Local he is sceptical about the potential efficacy of the Swedish law.

“Why do bin Laden and [his accomplice] al-Zawahiri take the trouble to send tapes to the media rather then call them? They know there are technologies that can trace people’s location and therefore they avoid it,” he explains.

Mujdeh argues that by far the best way to infiltrate terrorist groups and learn about planned activities is to act swiftly on insider tips.

“I have never encountered a situation in which al-Qaeda operatives have planned an attack over the telephone. Even if they did, they would never say it directly. They will always have code words,” he says.

Under the terms of the draft bill, an FRA supercomputer would be able to use a hi-tech key word search system to listen in on a phone call between someone in Sweden and a friend in the Middle East.

The computer could, for example, pick up the mention of a big wedding in Stockholm. If the agency suspects that the call is more sinister than it first appears, FRA would then be in a position to flag the Swede’s telephone number and record all his future calls, as well as any calls coming into Sweden from his Middle Eastern friend.

The new bill would then allow Swedish authorities to be ready to pounce when the Swede’s friend lands at Arlanda airport from the Middle East to attend the wedding.

But opponents of the legislation wonder: how will FRA be able to determine if the planned “wedding” is the sort with flowers and cake, rather than a cover for death and destruction?

Moreover, what will happen to all the extraneous personal information captured by FRA’s enhanced powers of surveillance?

While FRA says it will destroy any non-essential information it gathers, the promises have done little to allay the fears of the bill's critics.

Pär Ström, privacy ombudsman at the independent New Welfare Foundation, is enraged by the proposed legislation, which he refers to as ‘Lex Orwell’ and regards as little more than a tool with which to invade the privacy of the general public.

“FRA is going to read all Swedes’ emails and text messages, listen to their telephone conversations and see which web sites we are browsing. This is absurd,” he says in a statement.

In the extensive draft document behind the proposal, the Swedish defence ministry contends that the changing face of international politics, new security threats, and the development of information technologies all mean that the Swedish government needs to find new ways to safeguard the sovereignty and security of the kingdom. The dangers cited include terrorism, international crime, the spread of weapons of mass destruction, major refugee movements and threats against the country’s technological infrastructure.

According to the draft, FRA will initially invest 200 million kronor ($32 million) in the construction of a supercomputer, much like the US Echelon system, programmed with key words, phrases and dialects, as well as physical and electronic addresses.

FRA would not reveal the number of key words programmed into the system or the methods used to select key words. But writing in its consultation response to the draft proposal, the Swedish Data Inspection Board said the list would include not only the names and addresses of individuals and agencies, but also media companies, law firms, health care institutions, and charitable organizations, among others.

Nevertheless, FRA has tried to reassure the public that the law would not lead to a form of general or intrusive surveillance.

“One can describe the search terms as fish hooks that are plunged into a river. Some fish get caught, but most of the catch is off limits and will not be caught. Instead it will disappear forever with the current,” says FRA on its website.

But some experts believe that the FRA’s fishing expedition will in fact cause injury to the little fish rather than helping to catch the bigger ones who know how to avoid detection and are practiced in the art of circumnavigating surveillance.

“One risk with the general surveillance of the public is that it can affect law abiding citizens more than it does the criminals, who master the art of not leaving any tracks,” says the Swedish Research Council.

Almost all actors in the Swedish justice system have similarly slammed the proposed bill:

The National Police Board accuses the defence ministry of blowing threats to Sweden’s security out of all proportion.

The Swedish Newspaper Publishers' Association argues that the legislation is on a direct collision course with the Swedish Constitution as it destroys any guarantees for source anonymity.

And the Stockholm County Administrative Court questions the defence ministry’s right to gather information about crimes it says are really matters for the police.

But the surveillance bill has also secured a powerful ally in the form of the Office of the Chancellor of Justice, Sweden’s highest legal official, which gave its backing to the wiretapping scheme despite being “fully aware of the privacy risks the system entails”.

Even Amnesty International initially gave the proposal a tentative thumbs up, arguing that the defence ministry had dealt with the law’s thorny privacy issues “in a satisfactory manner”.

But Madeleine Seidlitz, a lawyer with Amnesty's Swedish chapter, stresses that the organization would like the law to have “as narrow a scope as possible”.

“We supported the proposal because it is better to have a law than no law at all,” she tells The Local.

Rather than focusing on the complex privacy issues raised by the proposed legislation, award-winning crime journalist Dick Sundevall reiterates the same criticism expressed by the former Taliban official cited above: namely, that the system simply will not work.

“Instead of investing in electronic surveillance, more weight should be put on human intelligence gathering,” he says.

His sentiments are shared by Christer Karlsson, a 57-year-old ex-criminal and head of KRIS, an organization for former offenders wishing to make a fresh start in society.

“I know by heart the locations of surveillance cameras in the city,” he tells The Local.

“I once dealt drugs over the telephone and six months later I heard my own voice in court during my trial. I decided there and then to find new ways so as to not hear myself again in a court of law,” he adds.

Besides being highly controversial, the legislation has also been largely misunderstood by both the media and the general public. Coming hot on the heels of former Social Democratic Justice Minister Thomas Bodström’s controversial bugging law, the two pieces of legislation are often confused. On its website FRA makes reference to at least two dozen news articles it claims are ill-informed.

FRA also rejects Pär Ström’s claim that all communications - including email, fax, telephone and text messaging - will be scanned for information in real time. But Registernämnden, the now defunct predecessor to the Swedish Commission on Security and Integrity Protection, points out in its consultation response that Ström is in fact not far off the mark, explaining that, for technical reasons, even local Swedish telephone traffic can cross national borders several times during the course of a conversation.

The surveillance bill first saw the light of day in 2005 under the last Social Democratic government. But Sweden’s largest party was reluctant to go ahead with the proposal. Even then-justice minister Bödstrom, whose much-maligned bugging law came into effect at the beginning of this year, felt the surveillance scheme went too far.

“The bugging law was criticized by some of the centre-right-parties,” Bodström’s spokesperson Linda Romanus tells The Local.

Romanus went as far as to call the current surveillance proposal “un-Swedish”.

The legislative proposal to clarify and expand FRA’s powers to monitor communications in Sweden was dusted off as soon as the centre-right coalition won the 2006 election. Days before the Christmas holidays that year, the proposal was sent out to a range of agencies and organizations.

The consultation partners were given only until the first week of January to formulate a response. Many agencies complained that they were given far too little time to voice their various concerns.

The proposal, controversial since its inception, was put on ice early last year following criticism from the opposition. But this time the government has come to battle fully armed and determined to pass the bill.

All Riksdag members of the centre-right coalition have been told to vote in favour. One centre-right politician, who preferred to remain anonymous, says that members of parliament opposed to the move were advised to stay away from the Riksdag on the day of the vote.

All that is needed to block the proposal is for four centre-right members of parliament to vote against the bill. One possible candidate, Centre Party MP Fredrik Federley, is openly wrestling with his conscience ahead of the crucial Riksdag debate.

“The pressure within the party is moving in two directions,” he writes on his blog.

“From members and from my home district, it’s clear: Vote NO. This is also my own conviction, which is shared by my voters. But at the same time, the internal pressure on us is huge.

“That’s why I’m staying very quiet now. I’ll make my decision, but until then I’ll be in a state of turmoil,” Federley adds.

Mehmet Kaplan, a Green Party member of the parliamentary justice committee, would dearly love to see the bill scrapped but is resigned to a future in which civil liberties in Sweden are considerably less secure.

“June 17th will go down as a very dark day in Sweden’s history,” he tells The Local.