The Babylonian Origins of Easter (Ishtar) 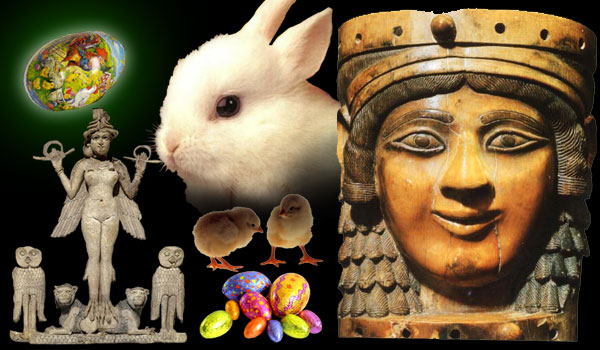 Easter is a day that is honered by nearly all of contemporary Christianity and is used to celebrate the resurrection of Jesus Christ.

The holiday often involves a church service at sunrise, a feast which includes an "Easter Ham", decorated eggs and stories about rabbits.

Those who love truth learn to ask questions, and many questions must be asked regarding the holiday of Easter.

Is it truly the day when Jesus arose from the dead? Where did all of the strange customs come from?

The first thing we must understand is that professing Christians were not the only ones who celebrated a festival called "Easter."

"Ishtar", which is pronounced "Easter" was a day that commemorated the resurrection of one of their gods that they called "Tammuz", who was believed to be the only begotten son of the moon-goddess and the sun-god.

In those ancient times, there was a man named Nimrod, who was the grandson of one of Noah´s son named Ham.

After the death of his father, Nimrod married his own mother and became a powerful King.

The Bible tells of of this man, Nimrod, in Genesis 10:8-10 as follows: "And Cush begat Nimrod: he began to be a mighty one in the earth. He was a mighty hunter before the Lord: wherefore it is said, even as Nimrod the mighty hunter before the Lord. And the beginning of his kingdom was Babel, and Erech, and Accad,and Calneh, in the land of Shinar."

Nimrod became a god-man to the people and Semiramis, his wife and mother, became the powerful Queen of ancient Babylon.

Nimrod was eventually killed by an enemy, and his body was cut in pieces and sent to various parts of his kingdom.

Semiramis had all of the parts gathered, except for one part that could not be found.

That missing part was his reproductive organ. Semiramis claimed that Nimrod could not come back to life without it and told the people of Babylon that Nimrod had ascended to the sun and was now to be called "Baal", the sun god.

Queen Semiramis also proclaimed that Baal would be present on earth in the form of a flame, whether candle or lamp, when used in worship.

Semiramis was creating a mystery religion, and with the help of Satan (ok?), she set herself up as a goddess.

Semiramis claimed that she was immaculately conceived.

She taught that the moon was a goddess that went through a 28 day cycle and ovulated when full.

She further claimed that she came down from the moon in a giant moon egg that fell into the Euphrates River.

This was to have happened at the time of the first full moon after the spring equinox.

Ishtar soon became pregnant and claimed that it was the rays of the sun-god Baal that caused her to conceive.

The son that she brought forth was named Tammuz.

Tammuz was noted to be especially fond of rabbits, and they became sacred in the ancient religion, because Tammuz was believed to be the son of the sun-god, Baal. Tammuz, like his supposed father, became a hunter.

The day came when Tammuz was killed by a wild pig.

Queen Ishtar told the people that Tammuz was now ascended to his father, Baal, and that the two of them would be with the worshippers in the sacred candle or lamp flame as Father, Son and Spirit.

Ishtar, who was now worshipped as the "Mother of God and Queen of Heaven", continued to build her mystery religion.

The queen told the worshippers that when Tammuz was killed by the wild pig, some of his blood fell on the stump of an evergreen tree, and the stump grew into a full new tree overnight. This made the evergreen tree sacred by the blood of Tammuz.

She also proclaimed a forty day period of time of sorrow each year prior to the anniversary of the death of Tammuz.

During this time, no meat was to be eaten.

Worshippers were to meditate upon the sacred mysteries of Baal and Tammuz, and to make the sign of the "T" in front of their hearts as they worshipped.

They also ate sacred cakes with the marking of a "T" or cross on the top.

Every year, on the first Sunday after the first full moon after the spring equinox, a celebration was made.

It was Ishtar´s Sunday and was celebrated with rabbits and eggs.

Ishtar also proclaimed that because Tammuz was killed by a pig, that a pig must be eaten on that Sunday.

By now, the readers of this tract should have made the connection that paganism has infiltrated the contemporary "Christian" churches, and further study indicates that this paganism came in by way of the Roman Catholic System.

The truth is that Easter has nothing whatsoever to do with the resurrection of Jesus Christ.

We also know that Easter can be as much as three weeks away from the Passover, because the pagan holiday is always set as the first Sunday after the first full moon after the spring equinox.

Some have wondered why the word "Easter" is in the the King James Bible.

It is because Acts, chapter 12, tells us that it was the evil King Herod, who was planning to celebrate Easter, and not the Christians.

The true Passover and pagan Easter sometimes coincide, but in some years, they are a great distance apart.

We know that the Bible tells us in John 4:24, "God is a Spirit: and they that worship him must worship him in spirit and in truth."

The truth is that the forty days of Lent, eggs, rabbits,hot cross buns and the Easter ham have everything to do with the ancient pagan religion of Mystery Babylon. These are all antichrist activities! (ok?)

Satan is a master deceiver, and has filled the lives of well-meaning, professing Christians with idolatry.

These things bring the wrath of God upon children of disobedience, who try to make pagan customs of Baal worship Christian.

These customs of Easter honor Baal and is still worshipped as the "Rising Sun" and his house is the "House of the Rising Sun."

How many churches have "sunrise services" on Ishtar´s day and face the rising sun in the East?

How many will use colored eggs and rabbit stories, as they did in ancient Babylon.