The Collective: Largest Swarm of Robots Ever

Aug 14, 2014 By Henrik Palmgren | redice.tv
Is this simply incredible, or simply horrifying?

Roboticists have created a collective of 1,000 like-minded tiny robots swarming together in a hive to form symbols.

Introducing the "Kilobot Swarm". (More like ’killerbot", am I right?) 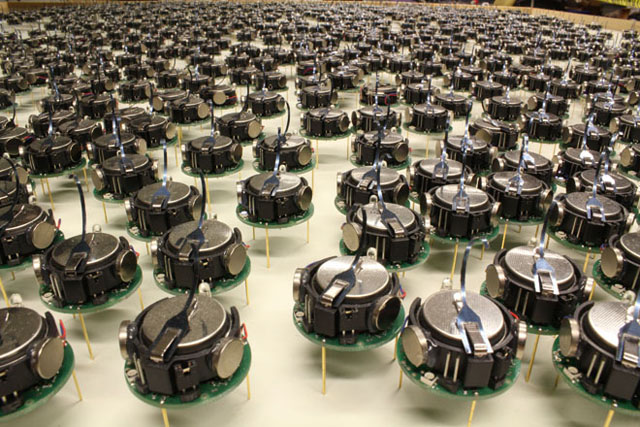 Alone, the simple little robot can’t do much, shuffling around on three vibrating tooth-pick legs. But working with 1,000 or more like-minded fellow bots, it becomes part of a swarm that can self-assemble into any two-dimensional shape.

These are some of the first steps toward creating huge herds of tiny robots that form larger structures—including bigger robots. Building swarming robots can also help scientists understand collective behavior seen in nature, from bird flocks and fish schools to networks of cells and neurons.

In the past, researchers have only been able to program at most a couple hundred robots to work together. Now, researchers at Harvard University have programmed the biggest robot swarm yet.

“It’s really a big accomplishment,” said roboticist Hod Lipson of Cornell University, who wasn’t involved in the work. “It’s the first demonstration of this swarm robotic behavior at the scale of 1,000 physical robots.” Getting even tens or a hundred robots to work together is difficult, with a lot of algorithmic and technical challenges, he says.