The Devil worshippers of Iraq 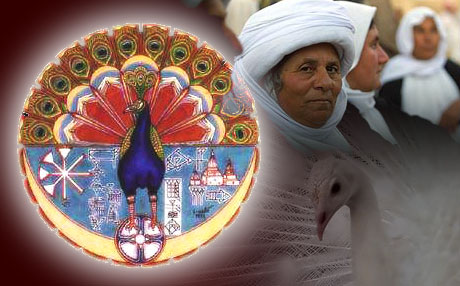 I'm in a community hall, on the outskirts of Celle, a north German town. On the walls are pictures of dark blue peacocks. Sitting at various tables around the room are dozens of Devil worshippers. At least, that's what some people call them.

Though we don't know it yet, right now several suicide bombs are going off near Mosul in Iraq, killing maybe 400. The victims belong to the same faith as those gathered here today.

They are Yezidi. And I'm here to unearth the reality of their fascinating religion. Why do they have such troubled relations with outsiders? Do they really worship the Devil?

The Yezidi of Celle are one of the largest groups of their sect outside the homeland of Kurdish Iraq. There may be 7,000 in this small town. Yezidi across the world number between 400,000 and 800,000.

Today the Yezidi in Celle don't seem keen to talk. I'm not surprised: I have been warned about their wariness of strangers, born of centuries of appalling persecution.

Eventually a dark, thickset man turns to me. He points to one of the peacocks on the wall: "That is Melek Taus, the peacock angel. We worship him." He sips his tea, and adds: "Ours is the oldest religion in the world. Older than Islam; older than Christianity."

After this cryptic statement he returns to his friends.

Luckily there is another Yezidi organisation in Celle that is said to be more forthcoming. On the way to meet its spokesman, I go through the bizarre beliefs of the Yezidi.

It's an impressive list. The Yezidi honour sacred trees. Women must not cut their hair. Marriage is forbidden in April. They refuse to eat lettuce, pumpkins, and gazelles. They avoid wearing dark blue because it is "too holy".

They are divided strictly into castes, who cannot marry each other. The upper castes are polygamous. Anyone of the faith who marries a non-Yezidi risks ostracism, or worse. Some weeks ago a young girl was stoned to death by her Yezidi menfolk in Iraq; she had fallen in love with a Muslim and was trying to convert. The sickening murder was filmed, and posted on the internet, adding to the Yezidis' unhappy reputation.

Yezidism is syncretistic: it combines elements of many faiths. Like Hindus, they believe in reincarnation. Like ancient Mithraists, they sacrifice bulls. They practise baptism, like Christians. When they pray they face the sun, like Zoroastrians. They profess to revile Islam, but there are strong links with Sufism, the mystical branch of Islam.

It's a remarkably confusing picture. And I still haven't got an answer to the main question: do they worship "Satan"?

In the centre of town I am greeted by Halil Savucu, a westernised spokesman for the Yezidi. Also with us is Uta Tolle, a German scholar of Yezidism.

In Halil's Mercedes we drive into the suburbs. On the way, the two of them give me their view of the faith. "Yezidi is oral, not literary," says Uta. "This is why it is sometimes hard to pin down precise beliefs. There are religious texts, like the Black Book, but they are not crucial. The faith is really handed down by kawwas, sort of musical preachers."

And who is Melek Taus? Halil looks slightly uncomfortable: "We believe he is a proud angel, who rebelled and was thrown into Hell by God. He stayed there 40,000 years, until his tears quenched the fires of the underworld. Now he is reconciled to God."

But is he good or evil? "He is both. Like fire. Flames can cook but they can also burn. The world is good and bad."

For a Yezidi to say they worship the Devil is understandably difficult. It is their reputation as infidels - as genuine "devil worshippers" - that has led to their fierce persecution over time, especially by Muslims. Saddam Hussein intensified this suppression.

There are further indications that Melek Taus is "the Devil". The parallels between the story of the peacock angel's rebellion, and the story of Lucifer, cast into Hell by the Christian God, are surely too close to be coincidence. The very word "Melek" is cognate with "Moloch", the name of a Biblical demon - who demanded human sacrifice.

The avian imagery of Melek Taus also indicates a demonic aspect. The Yezidi come from Kurdistan, the ancient lands of Sumeria and Assyria. Sumerian gods were often cruel, and equipped with beaks and wings. Birdlike. Three thousand years ago the Assyrians worshipped flying demons, spirits of the desert wind. One was the scaly-winged demon featured in The Exorcist: Pazuzu.

The Yezidi reverence for birds - and snakes - might also be extremely old. Excavations at ancient Catalhoyuk, in Turkey, show that the people there revered bird-gods as long ago as 7000BC. Even older is Gobekli Tepe, a megalithic site near Sanliurfa, in Kurdish Turkey (Sanliurfa was once a stronghold of Yezidism). The extraordinary temple of Gobekli boasts carvings of winged birdmen, and images of buzzards and serpents.

Taking all this evidence into account, a fair guess is that Yezidism is a form of bird-worship, that could date back 6,000 years or more. Over the centuries, new and powerful creeds, such as Islam and Christianity, have swept through Yezidi Kurdistan, threatening the older faith. But, like a species that survives by blending into the landscape, Yezidism has adapted by incorporating aspects of rival religions.

We've reached Halil's house. "Look at this," he says, showing me a picture of the peacock angel, and a copper sanjak - another representation of Melek Taus. When I have taken some photos, we all sit down to spaghetti bolognaise, with Halil's wife and their chatty kids. It suddenly seems a long way from the weirdness of Devil-worship, and the violence of the Middle East.

"We Yezidi are not saints," says Halil, "but we are a peaceful people. All we want is tolerance. We do not worship evil, we just see that the world contains good as well as bad. Darkness as well as light."

His words are timely. While we eat our pasta, the news comes through from Iraq of the bloody slaughter of Yezidi near Mosul. Halil is deeply distraught. "I feel absolute shock and horror, I feel sick to my stomach. All Yezidi are my family. But we are so alone in the world. We need friends. Many Yezidi would like to leave Iraq, but no one will give us visas."

He sighs, and adds: "The Yezidi have been persecuted for thousands of years, we are used to it. But we thought the new Iraq would protect minorities. We thought that things would get better when the Americans came…" And then he turns, and stares at the serene blue image, of the great peacock angel.