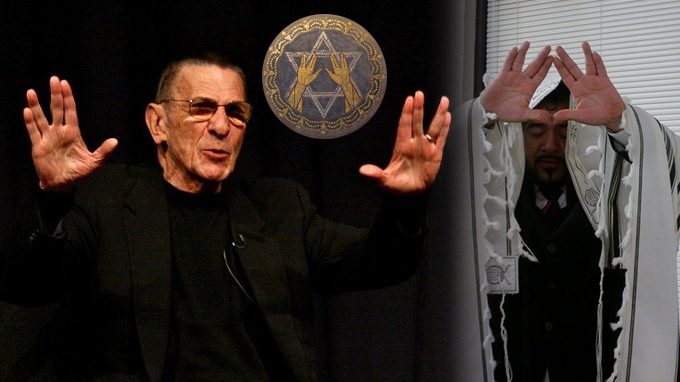 Leonard Nimoy first saw what became the famous Vulcan salute, “live long and prosper,” as a child, long before “Star Trek” even existed. The placement of the hands comes from a childhood memory, of an Orthodox Jewish synagogue service in Boston.

The man who would play Spock saw the gesture as part of a blessing, and it never left him. “Something really got hold of me,” Nimoy said in a 2013 interview with the National Yiddish Book Center.

Nimoy, who died on Friday, spoke about the Jewish roots of the famous gesture for an oral history project documenting the lives of Yiddish speakers, of which Nimoy is one.

At the beginning of the interview, Nimoy talked about his childhood in Yiddish. He was born in Boston, but his parents came from a village in what is now Ukraine, where he worked as a barber. “My first language was English,” Nimoy told the interviewer in Yiddish, “but I needed to speak Yiddish with my grandparents.”

A disclosure: Years ago, as a college student, I worked part-time at the National Yiddish Book Center, which is located on my alma mater’s campus.

Although Nimoy never hid his upbringing from the world, my short experience there is why Nimoy’s work to preserve the language of his childhood came to mind today. I reached out to the Center, which explained that Nimoy started recording Jewish short stories, from Eastern Europe, in 1995, for a radio show hosted by the Center. He funded another project to record Yiddish stories and distribute them to children.

“Toward the end of his life, he called for increased efforts to teach Yiddish to a new generation,” Aaron Lansky, the center’s president, added in an email. “I’m not sure any Vulcan ever spoke a more geshmak (flavorful) Yiddish. He will be missed.”

Nimoy’s incorporation of the blessing speaks particularly poignantly about the permeable boundaries between Spock and Nimoy himself.

“This is the shape of the letter shin,” Nimoy said in the 2013 interview, making the famous “V” gesture. The Hebrew letter shin, he noted, is the first letter in several Hebrew words, including Shaddai (a name for God), Shalom (the word for hello, goodbye and peace) and Shekhinah, which he defined as “the feminine aspect of God who supposedly was created to live among humans.”

The Shekhinah, Nimoy has said, was also the name of the prayer he participated in as a boy that inspired the salute. The prayer, meant to bless the congregation, is named after the feminine aspect of God, Nimoy explained in a 2012 post on the “Star Trek” site. “The light from this Deity could be very damaging. So we are told to protect ourselves by closing our eyes,” he wrote in the blog.

“They get their tallits over their heads, and they start this chanting,” Nimoy says in the 2013 interview, “And my father said to me, ‘don’t look’.” At first he obliged, but what he could hear intrigued him. “I thought, ‘something major is happening here.’ So I peeked. . And I saw them with their hands stuck out from beneath the tallit like this,” Nimoy said, showing the “V” with both his hands. “I had no idea what was going on, but the sound of it and the look of it was magical.”

After witnessing the ritual all those years ago, Nimoy practiced making the “V” with his fingers as a child. He “never dreamed” he would one day make the gesture so publicly and repeatedly as an adult.

That was, he said, until a “Star Trek” script required his character Spock to go home to Vulcan. “It was the first time we’d seen other Vulcans, other people of my race, so I was hoping to find some touching that could help develop the Vulcan sociology,” Nimoy said.

“I think we should have some special greeting that Vulcans do,” Nimoy recalled saying. He suggested the prayer gesture from his childhood.

“Boy,” he said, “that just took off. It just touched a magic chord.

He noted that “most people to this day still don’t know” the history of the greeting, although he repeatedly and enthusiastically shared its origin.

Laughing, Nimoy revealed the best part of it all: “People don’t realize they’re blessing each other with this!”